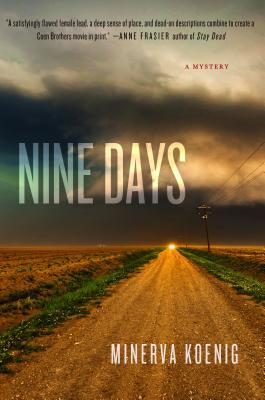 By Minerva Koenig
Unavailable. Orders will be auto-cancelled.

This is book number 1 in the A Julia Kalas Mystery series.

She's short, round, and pushing forty, but Julia Kalas is a damned good criminal. For 17 years she renovated historic California buildings as a laundry front for her husband's illegal arms business. Then the Aryan Brotherhood made her a widow, and witness protection shipped her off to the tiny town of Azula, Texas. Also known as the Middle of Nowhere.

The Lone Star sticks are lousy with vintage architecture begging to be rehabbed. Julia figures she'll pick up where she left off, but she's got a federal watchdog now: police chief Teresa Hallstedt, who is none too happy to have another felon in her jurisdiction. Teresa wants Julia where she can keep an eye on her, which turns out to be behind the bar at the local watering hole. The bar's owner, Hector Guerra, catches Julia's eye, so she takes the job. But before she can get to know him as well as she'd like, they find a dead body on the bar's roof.

The county sheriff begins trying to pin the murder on Hector for reasons that Julia discovers are both personal and nefarious. Unfortunately, the evidence cooperates, but Julia's finely-honed personal radar tells her Hector isn't a killer. She risks reconnecting with the outlaw underground to prove it and learns the hard way that she's not nearly as tough--or as right--as she thinks she is.

Nine Days, Koenig's debut, is atmospheric, gutsy and fun, and Julia Kalas is an intriguing new heroine in crime fiction.

MINERVA KOENIG is a licensed architect running her own one-woman practice. When not architecting or writing, she likes to sew, read, play chess, do yoga, dance, wrangle cats, and fight the patriarchy. Koenig lives in Austin, Texas.

“A delightfully twisty, turny, blind-alley-filled story… Koenig had me hooked from page one. I read all the way to page 283 in one sitting. As far as the promise of more Julia Kalas books to come? Sign me up!” —BookBrowse.com, Editor's Choice

“With biting dialogue, a twisty plot and a hero with an attitude as big as her mouth, this book's got lots of game.” —Milwaukee Journal Sentinel

“Small-town Texas is vividly brought to life in this atmospheric and entertaining debut that also introduces a memorable and unusual protagonist. It's bound to delight fans of Tricia Fields, Lori G. Armstrong, or James Lee Burke's 'Hackberry Holland' books.” —Library Journal (starred review and Mystery Debut of the Month)

“Texas architect Koenig's complex and intriguing suspense debut introduces 'Julia Kalas'--the name the WITSEC program assigned her after neo-Nazis made her a widow....Fans of distinctive female characters like Nevada Barr's Anna Pigeon and Becky Masterman's Brigid Quinn will be thrilled to add Koenig to their ranks.” —Publishers Weekly (starred review)

“With more twists and turns than a Texas corn maze, [Koenig's] flawed characters expose their foibles and stumble through a series of nefarious machinations that lead to a stunning revelation….Nine Days is a gem. It's hill country noir at its finest.” —The Boerne Star

“Julia Kalas, the star of this entertaining first novel, is a five-foot Sherman tank of criminal intentions. She's the real draw of the book.…This self-described ‘tough broad' is still a woman, though, fascinated by relationships, and women are likely to be her most appreciative audience.” —Booklist

“Those of us who worship Sue Grafton and her Alphabet Series of mysteries starring Kinsey Millhone have gone into pre-mourning, as the end is nigh…Let us praise the literary gods, then, that a worthy successor has arrived with Austin author Minerva Koenig and her debut novel, the funny, scary and devilishly twisty Nine Days. In all my gazillion years of reading Kinsey Millhone stories, I've never come across a female character with half the gumption, guts and "I just don't care" sass that Kinsey exudes. That is, until Julia Kalas, the whip-smart, witty, unconventionally attractive ex-money launderer at the heart of Nine Days….If all is right with the world, that'll just be the first of many, many Julia Kalas adventures.” —The Dallas Morning News

“Koenig's writing is hard-boiled yet fluid, transcending the clunky syntax typical of genre mystery novels and avoiding the purple prose that is their other hallmark… Nine Days has an ultramodern sensibility” —Santa Fe New Mexican

“Seventeen years experience running guns and washing dirty money has given narrator Julia Kalas a well-earned confidence, a rough-and-tumble way of talking you know will cause her trouble--and provide us with thrills--throughout this blue-ribbon debut novel. When her husband's killers chase Julia into a Texas-based witness protection program, and her new overseer pulls the wrong switches in Julia's worried mind, look out law enforcement, a murderous Aryan Brotherhood, and anybody else who might be trying to pin murder on Julia's new friend and employer, Hector. A shocking, rousing finish stretches the muscle and sinew of Julia's swagger, then twists us magically--a perfect setup for Julia and Hector's next legendary tale.” —Jack Getze, Fiction Editor, Spinetingler Magazine

“Enthralling from the first page, Nine Days is a blistering and unforgettable debut from a tremendous new voice in crime fiction. Minerva Koenig is a name to watch for.” —Ed Kurtz, author of A Wind of Knives and The Forty-Two

“Minerva Koenig has crafted a smart, twisty debut with the perfect noir scenario: A government witness who fears that her remote new address is only a trap. Julia Kalas can diagnose the structural ills of an old building in minutes but can't rebuild her life without demolishing the rotten, corrupt infrastructure of a whole town. Trouble in small town Texas? Brother, I've been there, and the only way I'm going back there again is with Kalas. Neither Barbie doll nor Phyllis Marlowe, she is sexy and appealing and, by the way, can probably kick your ass.” —Jesse Sublett, author of Grave Digger Blues