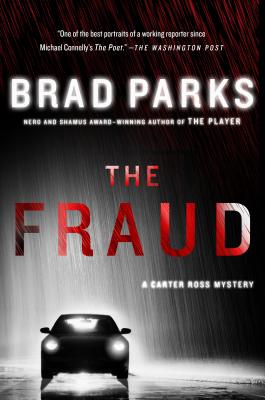 By Brad Parks
Unavailable. Orders will be auto-cancelled.

This is book number 6 in the Carter Ross Mysteries series.

In The Fraud, the most thrilling entry yet in Brad Parks's award-winning series, investigative reporter Carter Ross must chose who gets to live: him or his unborn child.

A rash of carjackings terrorizing Newark become newsworthy when one such theft ends in the murder of a wealthy banking executive. The affable, wisecracking Ross is assigned the story, but he's weary of only writing about victims of crime who happen to be rich and white. To balance his reporting, he finds a Nigerian immigrant of more modest means who was also killed during a recent carjacking.

When it turns out the two victims knew each other, sharing an unexplained round of golf at a tony country club shortly before their deaths, Carter is plunged onto the trail of a deadly band of car thieves that includes a sociopathic ex-convict. When his unborn child is put in harm's way, it becomes more than just a story for Carter. And he'll stop at nothing to rescue the baby-even if it costs him his own life.

Parks, a rising star on the crime fiction scene known for his mix of wit and grit, delivers his most emotionally resonant book yet.

“A fast-paced, often-funny read, and details about Newark and the decline of traditional newspapers add gritty realism.” —Publishers Weekly

“[The Player] is both an exciting look at how a reporter can challenge big-city crime and an often hilarious account of the complexities of one young man's romantic life...A highly entertaining tale and one of the best portraits of a working reporter since Connelly's Jack McEvoy.” —The Washington Post

“[Parks] offers another page turner, one that accurately portrays today's scaled-back (some would say decimated) newsrooms and pays homage to those working in a noble profession despite reduced circumstances. And while he spins a serious yarn, he injects enough humor that generates grins. But remember: Grins expose teeth, and The Player delivers a bone-crunching bite.” —The Richmond Times-Dispatch