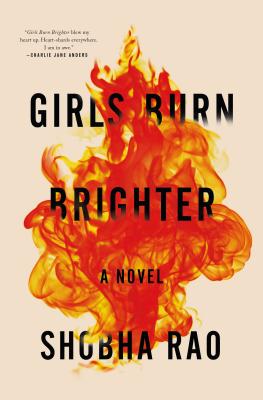 “Incandescent...A searing portrait of what feminism looks like in much of the world.” —Vogue

“A treat for Ferrante fans, exploring the bonds of friendship and how female ambition beats against the strictures of poverty and patriarchal societies.” —The Huffington Post

An electrifying debut novel about the extraordinary bond between two girls driven apart by circumstance but relentless in their search for one another.

Poornima and Savitha have three strikes against them: they are poor, they are ambitious, and they are girls. After her mother’s death, Poornima has very little kindness in her life. She is left to care for her siblings until her father can find her a suitable match. So when Savitha enters their household, Poornima is intrigued by the joyful, independent-minded girl. Suddenly their Indian village doesn't feel quite so claustrophobic, and Poornima begins to imagine a life beyond arranged marriage. But when a devastating act of cruelty drives Savitha away, Poornima leaves behind everything she has ever known to find her friend.

Her journey takes her into the darkest corners of India's underworld, on a harrowing cross-continental journey, and eventually to an apartment complex in Seattle. Alternating between the girls’ perspectives as they face ruthless obstacles, Shobha Rao's Girls Burn Brighter introduces two heroines who never lose the hope that burns within.

SHOBHA RAO moved to the U.S. from India at the age of seven. She is the winner of the 2014 Katherine Anne Porter Prize in Fiction, awarded by Nimrod International Journal. She has been a resident at Hedgebrook and is the recipient of the Elizabeth George Foundation fellowship. Her story "Kavitha and Mustafa" was chosen by T.C. Boyle for inclusion in the Best American Short Stories 2015. She lives in San Francisco. An Unrestored Woman is her debut.

One of the Best Books of the Month (Harper’s Bazaar, Entertainment Weekly, Bustle, Vulture, PureWow, Paste, Book Riot, Signature Reads, and The Chicago Review of Books)

“The debut novelist who has everyone talking this spring....The blurb on the cover of Shobha Rao’s Girls Burn Brighter uses a very particular and descriptive phrase by fellow author Charlie Jane Anders to describe what happens after reading the book: ‘Heart shards everywhere.’ If truer words have ever been spoken about the way a novel made us feel, we’d be hard-pressed to find them.” —Entertainment Weekly

“Engrossing…The pages keep turning, the language is lyrical and lovely, and many phrases call for pause and appreciation…Rao is a capable and confident writer, able to handle a vast and ambitious story line.” —The New York Times Book Review

“Skillfully rendered…. What’s most memorable about the novel, however, is the unadulterated, feminist voice.” —San Francisco Chronicle

“Shobha Rao writes cleanly and eloquently about women who, without their brightness, might have been left to die in their beds. She writes them into life, into existence, into the light of day.” —Los Angeles Times

“Incandescent...A searing portrait of what feminism looks like in much of the world.” —Vogue

“An incredibly raw and compelling story about two young girls who forge a strong bond while weaving saris in a small Indian village plagued by sexism and misogyny.” —InStyle

“This debut novel is a compelling story of unbreakable friendship...” —Real Simple

“A devastating debut, Girls Burn Brighter is a testament to the strength of female friendship…. Shobha Rao astounds in her debut novel, not just with stunning prose, but with mastery of pacing, too. In Rao’s hands the heavy, unrelenting subject matter, which might otherwise have been shattering for its raw honesty, is fluid and propulsive.” —Shelf Awareness

“A definite must-read for readers who love authors like Nadia Hashimi and Khaled Hosseini.” —Bustle

“A treat for Ferrante fans, exploring the bonds of friendship and how female ambition beats against the strictures of poverty and patriarchal societies.” —The Huffington Post

“An unbelievably beautiful and harrowing story of friendship and devotion.” —Book Riot

“The book has enormous emotional power and a compelling narrative that will carry the reader through to its unsettling conclusion.... The novel is a powerful testament to how something as seemingly small as a private friendship between two girls can be a tool to resist oppression.” —Dallas Morning News

“Girls Burn Brighter is the kind of book you open and fall into…Rao’s debut is a high achievement.” —KQED, San Francisco

“Girls Burn Brighter is an absolutely stunning debut novel from an author you’ll want to follow for years to come.” —Paste

“This debut novel is the perfect read for fans of Rupi Kaur.” —Brit + Co

“The two fierce young women draw you in with their resilience and hope, and their enduring bond will both inspire and break readers’ hearts.” —Apartment Therapy

“Unshakeable…the power and anguish in Rao’s novel builds, breaking your heart on one page even as it mends it, stronger, on the next.” —Omnivoracious

“A confident debut novel set in India and America about the unbreakable bond between two girls. From the menacing nooks of India's underworld to the streets of Seattle, this searing novel traces the nuances of adulthood and the enduring power of childhood bonds.” —The Chicago Review of Books

“Enchanting… The resplendent prose captures the nuances and intensity of two best friends on the brink of an uncertain and precarious adulthood… An incisive study of a friendship’s unbreakable bond.” —Kirkus Reviews, starred review

“This powerful, heart-wrenching novel and its two unforgettable heroines offer an extraordinary example of the strength that can be summoned in even the most terrible situations.” —Booklist, starred review

“Highly recommended for book discussion groups, this tale of sacrifice, exploitation, and reclamation is not to be missed.” —Library Journal, starred review

“Rao writes exquisite sentences…By the end of Girls Burn Brighter, Poornima and Savitha earn their places in the hearts of readers.” —Woodbury Magazine

“This novel burnt up my weekend. With beautiful language, warm friendships, and vivid images, once I started reading I could not stop. It’s a story of struggle and survival. Female friendship is the lifeline.” —Claire Cameron, author of The Bear and The Last Neanderthal

“Girls Burn Brighter by Shobha Rao blew my heart up. Heart-shards everywhere. I am in awe of the warmth and humanity in this book, even as it explores some incredibly dark places. I’m going to be thinking about Girls Burn Brighter for a while, and you’re going to be hearing a lot about it.” —Charlie Jane Anders, author of All the Birds in the Sky