Deep Down Dark: The Untold Stories of 33 Men Buried in a Chilean Mine, and the Miracle That Set Them Free (Paperback) 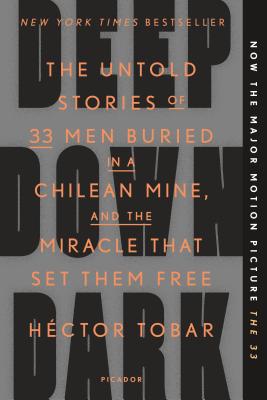 Deep Down Dark is the novel that inspired the film The 33 starring Lou Diamond Phillips, Cote de Pablo and Antonio Banderas.

When the San José mine collapsed outside of Copiapó, Chile, in August 2010, it trapped thirty-three miners beneath thousands of feet of rock for a record-breaking sixty-nine days. After the disaster, Pulitzer Prize-winning journalist Héctor Tobar received exclusive access to the miners and their tales, and in Deep Down Dark, he brings them to haunting, visceral life. We learn what it was like to be imprisoned inside a mountain, understand the horror of being slowly consumed by hunger, and experience the awe of working in such a place-underground passages filled with danger and that often felt alive. A masterwork of narrative journalism and a stirring testament to the power of the human spirit, The 33: Deep Down Dark captures the profound ways in which the lives of everyone involved in the catastrophe were forever changed.

“The equal, if the geographical inverse, of Into Thin Air.” —Maureen Corrigan, NPR’s Fresh Air

“Weaving together the drama of the miners' harrowing ordeal below ground with the anguish of families and rescuers on the surface, Tobar delivers a masterful account of exile and human longing, of triumph in the face of all odds. Taut with suspense and moments of tenderness and replete with a cast of unforgettable characters, Deep Down Dark ranks with the best of adventure literature.” —Scott Wallace, Los Angeles Times

“Whether the story is completely new to you, or if you were one of the millions glued to the news reports and wondering, will they make it-physically, emotionally, spiritually-you'll be greatly rewarded to learn how they did.” —Mac McClelland, The New York Times Book Review (Editors’ Choice)

“Héctor Tobar takes us so far down into the story and lives of the Chilean miners that his reconstruction of a workplace disaster becomes a riveting meditation on universal human themes. Deep Down Dark is an extraordinary piece of work.” —George Packer

“My favorite book of the year. Perfect for fans of Unbroken.” —Ann Patchett, People

“An account that brims with emotion and strength.” —USA Today

“A powerful tale of universal interest.” —The Christian Science Monitor

“That Tobar has so vividly reconstructed a life-threatening event remembered differently by thirty-three minds is a mountainous feat of reportage.” —The Washington Post