The Universe in Your Hand: A Journey Through Space, Time, and Beyond (Paperback) 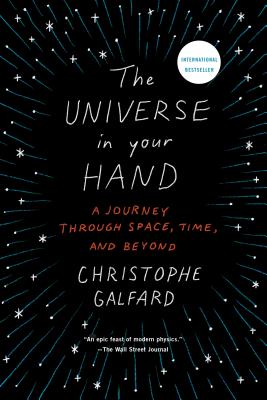 "If Ms. Frizzle were a physics student of Stephen Hawking, she might have written THE UNIVERSE IN YOUR HAND, a wild tour through the reaches of time and space, from the interior of a proton to the Big Bang to the rough suburbs of a black hole. It's friendly, excitable, erudite, and cosmic."
—Jordan Ellenberg, New York Times besteselling author of How Not To Be Wrong

Quantum physics, black holes, string theory, the Big Bang, dark matter, dark energy, parallel universes: even if we are interested in these fundamental concepts of our world, their language is the language of math. Which means that despite our best intentions of finally grasping, say, Einstein's Theory of General Relativity, most of us are quickly brought up short by a snarl of nasty equations or an incomprehensible graph.

Christophe Galfard's mission in life is to spread modern scientific ideas to the general public in entertaining ways. Using his considerable skills as a brilliant theoretical physicist and successful young adult author, The Universe in Your Hand employs the immediacy of simple, direct language to show us, not explain to us, the theories that underpin everything we know about our universe. To understand what happens to a dying star, we are asked to picture ourselves floating in space in front of it. To get acquainted with the quantum world, we are shrunk to the size of an atom and then taken on a journey. Employing everyday similes and metaphors, addressing the reader directly, and writing stories rather than equations renders these astoundingly complex ideas in an immediate and visceral way.

Utterly captivating and entirely unique, The Universe in Your Hand will find its place among other classics in the field.

CHRISTOPHE GALFARD holds a Ph.D. in theoretical physics from Cambridge University, where he was Professor Stephen Hawking’s graduate student from 2000 to 2006. He now devotes his time to spreading modern scientific knowledge to the general public in entertaining ways, in France and in Europe, giving talks to more than 50,000 people and is a regular contributor to French TV and radio shows. Galfard has written several YA novels about science, and was co-author with Stephen Hawking and his daughter on their first YA novel, George's Secret Key to the Universe.

"With its breezy conversational style, The Universe in Your Hand is well suited for the general reader with little to no prior knowledge of science... The reader will come away from [The Universe in Your Hand] with a deeper understanding of how modern physics has brought us closer to an ultimate understanding of reality."
- The New York Times Book Review


"If Ms. Frizzle were a physics student of Stephen Hawking, she might have written THE UNIVERSE IN YOUR HAND, a wild tour through the reaches of time and space, from the interior of a proton to the Big Bang to the rough suburbs of a black hole. It's friendly, excitable, erudite, and cosmic."
—Jordan Ellenberg, New York Times besteselling author of How Not To Be Wrong

"A useful book for readers to visualize the complex ideas of modern physics."
—Kirkus Reviews

“Entertaining and comprehensive… The deft and dazzling imagery makes difficult concepts accessible, streamlining the progression through topics and fulfilling Galfard’s promise to ‘not leave any readers behind.’… Readers looking to expand their knowledge of physics and cosmology will find everything they need here.”
—Publishers Weekly, Starred Review

"Galfard dispenses with mathematical formulas in this foray into modern physics, making a lively imagination the only portal necessary for general readers hungry for the intellectual excitement of astral and atomic exploration. In a series of mind-stretching thought experiments readers plunge into the hydrogen atom in a water molecule, there to contemplate the quantum fields that sustain all matter, then shoot out beyond supernovas to ponder the strangely opaque boundary of space-time... these probes into the universe will thrill readers but rarely perplex them... Galfard leaves exhilarated readers eager to share in the forthcoming discoveries."
—Booklist, Starred Review

"How can we ever hope to fully grasp the infinite complexities of space and time, or even the very nature of reality itself? Thankfully, Christophe Galfard shows us the way, through a well-written and thoroughly approachable journey through what we know of modern astronomy and physics. Part personal conversation, part travelogue, and part science primer for the non-scientist, The Universe in Your Hand is a delightful and highly educational read."
—Jim Bell, author of The Interstellar Age and Postcards from Mars

"The Universe in Your Hand is a masterpiece of popular science writing.”
—Shelf Awareness, Starred Review