Through a Glass, Darkly: Sir Arthur Conan Doyle and the Quest to Solve the Greatest Mystery of All (Hardcover) 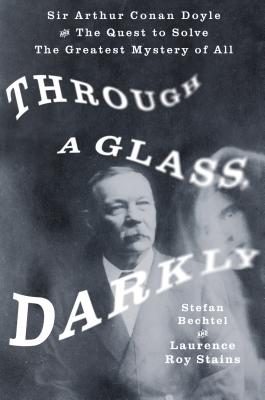 By Stefan Bechtel, Laurence Roy Stains
$26.99
Backordered. Place an order and we will let you know when to expect your book.

2018 ASJA Award-Winner in the Biography/History Category

Is it possible to make direct contact with the dead? Do the departed seek to make contact with us? The conviction that both things are true was the cornerstone of spiritualism, a kind of do-it-yourself religion that swept the Western world from the 1850s to the 1930s. Prominent artists and poets, prime ministers and scientists, all joined hands around the séance table. But the movement's most famous spokesman by far was Sir Arthur Conan Doyle, whose public quarrels with Houdini over the truth of spiritualism made headlines across the country.

Known to the world as the creator of Sherlock Holmes, Conan Doyle had undergone what many considered an enigmatic transformation, turning his back on the hyper-rational Holmes and plunging into the supernatural. What was it that convinced a brilliant man, the creator of the great exemplar of cold, objective thought, that there was a reality beyond reality?

Though most modern sources make Conan Doyle out to be a kindly but credulous old fool, and though the spiritualist era was rife with fraud, Stefan Bechtel and Laurence Roy Stains take a closer look. They reexamine the old records of trance mediums and séances, and they discover that what Conan Doyle and his colleagues uncovered is as difficult to dismiss now as it was then.

STEFAN BECHTEL is the author and co-author of a dozen books, including Through a Glass Darkly, which have been translated into 10 languages. He is a founding editor of Men’s Health and his work has appeared in Esquire, The Washington Post, and other publications.

LAURENCE ROY STAINS has been the editor of Philadelphia Magazine and the founding editor of New Shelter. He has written for national publications, including The New York Times Magazine and The Washington Post. He is an associate professor of journalism at Temple University.

“Through a Glass, Darkly is a terrific book, lively, well researched, and a great way to catch up on one of the strangest, most mysterious, and largely forgotten moments in American History. Focusing on Sir Arthur Conan Doyle, who risked everything to prove that life after death exists, is a brilliant way to present the larger story of spiritualism."—Christine Wicker, New York Times bestselling author of Lily Dale: The True Story of the Town That Talks to the Dead

"A fascinating addition to the existing work on Conan Doyle and spiritualism, which shows again how the creator of the world's most famously rational human calculating machine was often quite literally away with the fairies."—Christopher Sandford, author of Masters of Mystery: The Strange Friendship of Arthur Conan Doyle and Harry Houdini

"Through a Glass, Darkly is a wonderful read, covering the key events of both spiritualism and Sir Arthur Conan Doyle’s life with gusto. It is consistently entertaining and, more importantly, thought-provoking."—Jim B. Tucker, MD, New York Times bestselling author of the Return to Life: Extraordinary Cases of Children Who Remember Past Lives

"A rollicking story of a little-known aspect of the life of Sherlock Holmes' famous creator. Not only does Through A Glass Darkly tell the story of Arthur Conan Doyle's lifelong obsession with Spiritualism, but it also raises fascinating questions about death, the afterlife, and how we mourn."—Colin Dickey, author of Ghostland: An American History in Haunted Places