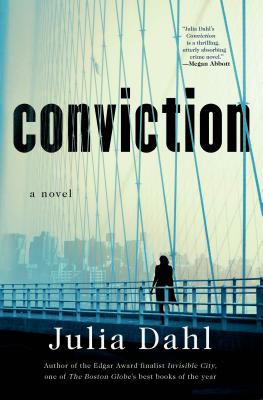 By Julia Dahl
Email or call for price
Hard to Find

This is book number 3 in the Rebekah Roberts Novels series.

New York City 1992: a year after riots exploded between black and Jewish neighbors in Brooklyn, a black family is brutally murdered in their Crown Heights home. A teenager is quickly convicted, and the justice system moves on.
Twenty-two years later, journalist Rebekah Roberts gets a letter: I didn't do it. Frustrated with her work at the city’s sleaziest tabloid, Rebekah starts to dig. But witnesses are missing, memories faded, and almost no one wants to talk about that grim, violent time in New York City—not even Saul Katz, a former NYPD cop and her source in Brooklyn’s insular Hasidic community.
So she goes it alone. And as she gets closer to the truth of that night, Rebekah finds herself in the path of a killer with two decades of secrets to protect.
From the author of the Edgar-nominated Invisible City comes another timely thriller that illuminates society’s darkest corners. Told in part through the eyes of a jittery eyewitness and the massacre’s sole survivor, Julia Dahl's Conviction examines the power—and cost—of community, loyalty, and denial.

JULIA DAHL is a journalist specializing in crime and criminal justice. She has worked as a reporter for CBS News.com and the New York Post, and her feature articles have appeared in Mental Floss, Salon, the Columbia Journalism Review and many others. She was born in Fresno, California to a Lutheran father and Jewish mother and now lives in Brooklyn. Her Rebekah Roberts Novels include Invisible City and Run You Down.

"A suspenseful and compulsive page-turner adroitly capturing Brooklyn in what’s left of its melting-pot glory. Roberts’s dogged, heart-and-mind-centered pursuit of truth, fairness, and justice shines like a beacon in the dark, and Dahl renders this with grace and substance.” - Boston Globe

“A murder mystery for our tumultuous times... Dahl writes deftly about race, religion, and politics in NYC, both then and now." -New York Magazine

"Dahl’s crime reporting background pays off, combining just the right amount of detail with a fast-moving pace and a fascinating glimpse into an insular world… Newcomers to this award-winning series can jump right in with this installment and be eager to read about Rebekah’s earlier investigations… A surefire winner for any mystery or suspense fan.”– Library Journal starred review

"Dahl shows great command over the darker, creepier elements of her genre and will keep you reading by her deft yet unobtrusive deployment of plot twists and there are many of these going off like small explosives along the way." - Kirkus Reviews

"A tale that has at its heart the very meaning of power and poverty, justice, family, and, best of all, hope." - Booklist, starred review

“Julia Dahl’s Conviction is a thrilling, utterly absorbing crime novel. With tender-tough reporter Rebekah Roberts at the story’s center, it jolts the heart, while also raising bigger, troubling questions—about criminal confessions, urban fear, and the many, many ways our moral and ethical convictions can both guide us and mislead us, and ultimately save us.”—Megan Abbott

“Conviction is well plotted, surprising, and convincing. But most of all it engages both the mind and the heart in a way that makes it particularly relevant to the atmosphere of the moment.”
-- Reviewing the Evidence

Praise for Run You Down

“Dahl is an evocative writer, never more so than when she's describing the nascent yearnings of those younger members of [the ultra-Orthodox Jewish] community-gay, vaguely feminist, simply different-who can't quite fit in, but can't quite leave.” —NPR's Fresh Air

“[A] strong sequel…Aviva emerges as a woman with the great strength to survive suffering on a biblical scale.”—The New York Times Book Review

"The author paints her portraits of physical settings and cultural communities with authority and skill…The main characters in this fine thriller are unforgettable. Supplemented by an intriguing and distinctive supporting cast, Run You Down will make Julia Dahl a strong candidate for more accolades like those she received for Invisible City.”—The Washington Independent Review of Books
Praise for Invisible City

“An absolutely crackling, unputdownable mystery told by a narrator with one big, booming voice. I loved it.”—Gillian Flynn

“Fast-paced, suspenseful...[Invisible City] rises above the crime-novel genre in its unusual psychological, spiritual and sociological dimensions, entering a world unfamiliar to most people.”—The Washington Post

“Bringing together the hyenas of tabloid journalism with the secretive, inwardly focused, self-protecting religious Jews, Dahl manages to demonize and humanize both, while delivering a riveting story. I sincerely hope there will be a sequel because after reading the last page, I wanted to know: What happens next?” —The Boston Globe