You Don't Know My Name (The Black Angel Chronicles #1) (Hardcover) 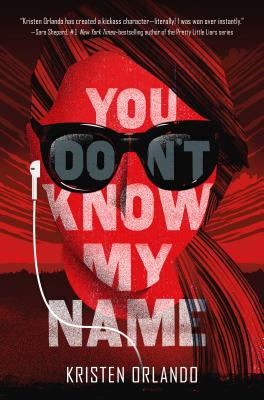 By Kristen Orlando
Not available to order

This is book number 1 in the The Black Angel Chronicles series.

Seventeen-year-old Reagan Elizabeth Hillis is used to changing identities overnight, lying to every friend she’s ever had, and pushing away anyone who gets too close. Trained in mortal combat and weaponry her entire life, Reagan is expected to follow in her parents’ footsteps and join the ranks of the most powerful top-secret agency in the world, the Black Angels. Falling in love with the boy next door was never part of the plan.

Now Reagan must decide: Will she use her incredible talents and lead the dangerous life she was born into, or throw it all away to follow her heart and embrace the normal life she's always wanted? And does she even have a choice?

Find out if you are ready to join the Black Angels in debut author Kristen Orlando’s You Don't Know My Name, the captivating and emotional first book in the Black Angel Chronicles, chosen by readers like you for Macmillan's young adult imprint Swoon Reads.

"This is my ideal sort of book, full of tension, action, romance, family issues, and a girl struggling to figure out her identity!" —Sara Shepard, #1 New York Times Best Selling author of The Pretty Little Liars series

"This one’s a page-turner." —Booklist

"A solid addition to high school collections, especially those with patrons who love stories of spy craft and secret identities, with a splash of romance" —School Library Journal

Writing is one of the great loves of Kristen Orlando’s life and she has been lucky enough to make it her living, first as a television producer, then as a marketer and now as a novelist. Kristen graduated with a B.A. in English literature from Kenyon College. She lives in Columbus, Ohio with the other great love of her life, Michael. You Don’t Know My Name is her debut novel.

"This is my ideal sort of book, full of tension, action, romance, family issues, and a girl struggling to figure out her identity. Kristen Orlando has created a kickass character—literally!—I was won over instantly. I can't wait for the sequel!" —Sara Shepard, #1 New York Times Best Selling author of The Pretty Little Liars series

"At its core, it is an action-packed novel about searching for oneself in the midst of heavy expectations. The violence is plot-advancing rather than gratuitous, while the main character is a strategizing, brave teen who is attempting to find her way both in the moment and into her own future. A solid addition to high school collections, especially those with patrons who love stories of spy craft and secret identities, with a splash of romance" —School Library Journal

"This action-packed suspense novel is the first in a new series that features a kick-ass female protagonist whose training regimen and smoldering love interest rival that of Divergent’s Tris Prior."— Bookpage

"If you are a fan of Ally Carter's Gallager Girls or Heist Society, You Don't Know My Name needs to be on your radar. The protagonist is a strong, likable character and the romance that develops is sweet. Then there is the heart-stopping action and the suspenseful and explosive ending." —Romantic Times Book Review

"There is plenty of action and wish fulfillment as Reagan insubordinately takes ridiculous risks, largely successfully. Teens who enjoy a little romance and the contrast of normal life that serves to heighten the dream of a teen operative masterfully battling a clearly defined evil will relish Reagan as an impressively powerful heroine." —VOYA

“I couldn't put this book down! I was reading it from my phone, my tablet, and my work computer! I like how the fight scenes felt so real - my heart was pounding! I can't wait to see the sequel. I hope this becomes a Trilogy!” —Jennifer, Swoon Reads Commenter

“Amazingly fast-paced action thriller in the tradition of Hunger Games or Divergent without the dystopia. Reagan is a heroine worthy of superb story-telling skills.” —Katie Borden, Swoon Reads Commenter