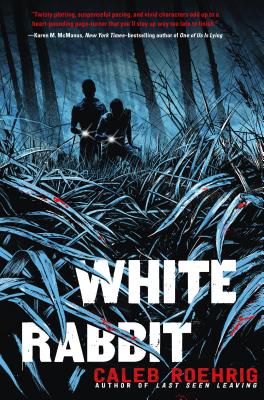 Rufus Holt is having the worst night of his life. It begins with the reappearance of his ex-boyfriend, Sebastian—the guy who stomped his heart out like a spent cigarette. Just as Rufus is getting ready to move on, Sebastian turns up out of the blue, saying they need to "talk." Things couldn’t get worse, right?

Then Rufus gets a call from his sister April, begging for help. He and Sebastian find her, drenched in blood and holding a knife beside the dead body of her boyfriend, Fox Whitney.

April swears she didn’t kill Fox. Rufus knows her too well to believe she’s telling him the whole truth, but April has something he needs. Her price is his help. Now, with no one to trust but the boy he wants to hate yet can’t stop loving, Rufus has one night to clear his sister’s name . . . or die trying.

Caleb Roehrig's debut YA thriller, Last Seen Leaving, was called one of the Best YA Novels of 2016 by Buzzfeed.com. Caleb lives with his husband in Los Angeles.

"Twisty plotting, suspenseful pacing, and vivid characters add up to a heart-pounding page turner that you'll stay up way too late to finish." -- Karen M. McManus, New York Times-bestselling author of One of Us Is Lying.

"An emerging talent, Caleb Roehrig gives us another exciting, addictive YA thriller with his second novel, White Rabbit. Roehrig kept me guessing until the very end. I can’t wait to see what he does next!" --Kristin Cast, #1 New York Times-bestselling co-author of The House of Night series

"Cinematic, nail-biting, and so much freaking fun -- destined to be a gay YA classic." -- Cale Dietrich, author of The Love Interest

"In this thrilling sophomore outing from Roehrig (Last Seen Leaving), 16-year-old Rufus Holt sets out with his ex, Sebastian, after getting a phone call from his half-sister April, who is at a party, begging for help. ... Roehrig’s ... characters and family dynamics are heartbreakingly real. He nails the angst of spending time with an ex that you can’t help but love, as well as the heartache and confusion of coming out."--Publishers Weekly

"Roehrig masterfully employs aspects of the mystery and thriller genres to create a gripping drama that also encompasses the realities of being a teen, including strained family dynamics and the courage required to come out. Readers will find this novel difficult, if not impossible, to put down."--VOYA, starred review

"Roehrig deftly weaves together thrills, intrigue, and fast-paced action in this delectable murder mystery. The novel is unapologetically queer, allowing Rufus and Sebastian to explore their complicated relationship, even against the backdrop of the intensely emotional and melodramatic family dynamics .... Roehrig’s narrative is deliciously sensational on the surface but sensitive and heartfelt at its core. — Booklist magazine

"This excellent mystery has strong and believable characters. ...Brief flashbacks of Rufus and Sebastian’s story help give context to and propel current action that unfolds in a well-timed manner. Their relationship is the core of this tale, and it’s portrayed intelligently and realistically with appropriate depth and compassion"--School Library Journal

"Readers up for a sexy, gory, swoony, suspenseful murder mystery/romance mashup will enjoy this."-- The Bulletin for the Center for Children's Books, recommended title

"Flynn’s internal struggle to open up about his sexuality carries weight, and readers will be drawn into his emotional journey and his adventures in amateur sleuthing. . . . A fun mystery with a credible emotional pull." —School Library Journal on Last Seen Leaving