Under the Midnight Sun: A Novel (Hardcover) 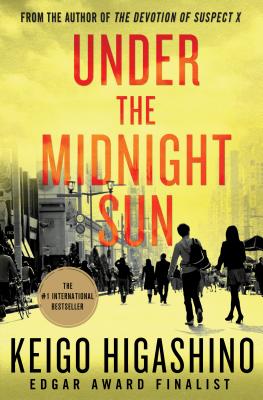 While it is said that evil does bad things, true evil - that dark malevolence that seethes in the blackest places and broods - manipulates others into doing its dirty work, and Higashino's new book is a vivid study of true evil over the span of twenty years. The murder of a pawnbroker in 1973 is the core crime that Detective Sasakagi cannot solve and won't forget - especially in relation to Ryo, the murdered man's son, and Yuhiko, the daughter of the murdered man's lover. A complex novel with fantastic character development, Higashino plays with concepts of guilt, morality and love as seen through the eyes of the myriad characters who come and go in the novel. We become aware how many pieces of the puzzle fit into place by reading between the lines, for Higashino is a master of giving you only so much to go on and the reader having to draw his or her own conclusions. The book shifts gears toward the end becoming much more of a thriller as the pages run down and the ultimate truth is revealed only at the end. Wondrous and absolutely impossible to put down, Under the Midnight Sun is another triumph for this master of the genre who will undoubtedly win new fans with this marvelous mystery novel.

From the acclaimed international bestseller Keigo Higashino (The Devotion of Suspect X) comes a sweeping novel in the tradition of Les Miserables and Crime and Punishment. This is the compelling story of a brutal crime and the two teenagers—Ryo, the son of the murdered man, and Yukiho, the daughter of the main suspect—whose lives remain inextricably linked over the twenty-year search for the truth behind the crime.

In Osaka in 1973, the body of a murdered man is found in an abandoned building. Investigating the crime, Detective SasagakI is unable to find the killer. Over the next twenty years, through the lens of a succession of characters, Higashino tells the story of two teens, Ryo and Yukiho, whose lives are most affected by the crime, and the obsessed detective, Sasagaki, who continues to investigate the murder, looking for the elusive truth.

Under the Midnight Sun is a complex, psychological novel about crime and its after-effects by one the most read and most accomplished contemporary mystery author. A twisting, compelling work that will astonish and delight Higashino’s old fans and new readers alike.