Girls Made of Snow and Glass (Paperback) 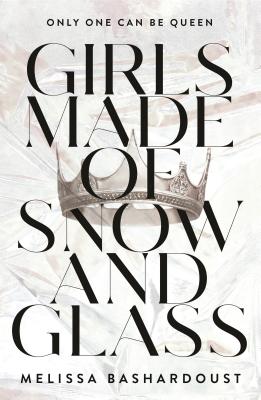 Melissa Bashardoust’s acclaimed debut novel Girls Made of Snow and Glass is “Snow White as it’s never been told before...a feminist fantasy fairy tale not to be missed” (BookPage)!

Sixteen-year-old Mina is motherless, her magician father is vicious, and her silent heart has never beat with love for anyone—has never beat at all, in fact, but she’d always thought that fact normal. She never guessed that her father cut out her heart and replaced it with one of glass. When she moves to Whitespring Castle and sees its king for the first time, Mina forms a plan: win the king’s heart with her beauty, become queen, and finally know love. The only catch is that she’ll have to become a stepmother.

Fifteen-year-old Lynet looks just like her late mother, and one day she discovers why: a magician created her out of snow in the dead queen’s image, at her father’s order. But despite being the dead queen made flesh, Lynet would rather be like her fierce and regal stepmother, Mina. She gets her wish when her father makes Lynet queen of the southern territories, displacing Mina. Now Mina is starting to look at Lynet with something like hatred, and Lynet must decide what to do—and who to be—to win back the only mother she’s ever known…or else defeat her once and for all.

Entwining the stories of both Lynet and Mina in the past and present, Girls Made of Snow and Glass traces the relationship of two young women doomed to be rivals from the start. Only one can win all, while the other must lose everything—unless both can find a way to reshape themselves and their story.

Melissa Bashardoust received her degree in English from the University of California, Berkeley, where she rediscovered her love for creative writing, children’s literature, and fairy tales and their retellings. She currently lives in Southern California with a cat named Alice and more copies of Jane Eyre than she probably needs. Girls Made of Snow and Glass is her first novel.

“This beautifully wrought novel offers plenty of fairy-tale wonder, but Bashardoust resists the most common tropes; instead, she tells a story where women save each other with their own ingenuity, bravery, and love, and power and compassion can exist hand in hand. Compellingly flawed characters, vivid world-building, and pitch-perfect pacing make this utterly superb.” —ALA Booklist, starred review

“Magic, mother-daughter conflict, and the quest for self-identity are given a dark and fantastical treatment in this chilling feminist adaptation of the Snow White fairy-tale. A hauntingly evocative adaptation that stands on its own merits.” —Kirkus Reviews, starred review

“If you thought you were done with the re-imagined fairy tale trope, suspend your moratorium for Girls Made of Snow and Glass: Melissa Bashardoust has created a story more The Bloody Chamber than damsel-in-distress fable.” —Bustle

“This is Snow White as it’s never been told before. Fans of Game of Thrones will relish the loyalties and betrayals; with elements of the medieval legend of the golem, echoes of the movie Frozen, and plenty of magic, Girls Made of Snow and Glass is a feminist fantasy not to be missed.” —BookPage

“A gripping, dark, and ultimately heart-affirming retelling of the rivalry between Snow White and her wicked queen, but this time that wickedness is a wild longing—in both women—to be loved and seen for who they really are. These are fairy tales the way they’re supposed to be—full of horror and doubt, with the actualization of the heroines always shining at the center, sharp as glass.” —Blackbird

“A must-have for those who love luscious YA retellings. Absolutely stunning.” —Book Riot

“A richly written rethinking of Snow White...Bashardoust thoughtfully reflects on the complicated nature of the stepdaughter/stepmother relationship while exploring agency, individuality, love, and free will.” —Publishers Weekly

“In Girls Made of Snow and Glass, Melissa Bashardoust has given us exquisite displays of magic, complex mother-daughter relationships, and gloriously powerful women triumphing in a world that does not want them to be powerful. A gorgeous, feminist fairy tale.” —Traci Chee, author of The Reader and The Speaker

“Girls Made of Snow and Glass is like reading a particularly wonderful and vivid dream, complete with imaginative magic, delightful characters, and beautiful language. Melissa Bashardoust's debut novel is everything a fairy tale should be.” —Jodi Meadows, coauthor of My Lady Jane and author of Before She Ignites