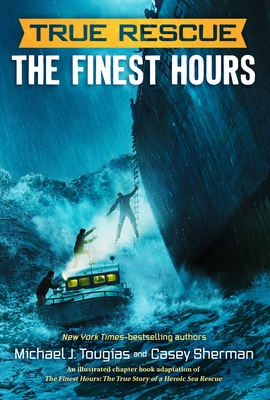 Four young men in a tiny lifeboat brave a dreadful storm to save dozens of lives in this illustrated chapter book adaptation (for readers 6-9) of the New York Times bestseller The Finest Hours.

On the night of February 18th, 1952, during one of the worst winter storms that New England has even seen, two oil tankers off the shore of Cape Cod are torn in half by the force of the seas. For the men on board, survival seemed impossible. What follows is a harrowing Coast Guard rescue in a tiny lifeboat, where four young heroes beat the odds and bring more than thirty stranded sailors to safety.

This first book in the True Rescue chapter book series is a fast-paced, uplifting story that puts newly independent readers in the middle of the action.

Michael J. Tougias is the author of many award-winning true rescue stories, including the New York Times-bestseller The Finest Hours, A Storm Too Soon, Into the Blizzard, and Attacked at Sea. He also published a memoir, The Waters Between Us: A Boy, A Father, Outdoor Misadventures and the Healing Power of Nature. A frequent lecturer on his work, Tougias splits his time between Massachusetts and Florida.

Mark Edward Geyer is the illustrator of the True Rescue chapter book series, as well as three Stephen King novels, and Blood Communion by Anne Rice, among others.

Casey Sherman is an award winning journalist and bestselling author of The Finest Hours, Bad Blood, Black Irish, and Black Dragon. He received the Edward R. Murrow Award for Journalistic Excellence as a member of the CBS Boston news team, and has been nominated for an Emmy Award. A featured guest on major television networks and news programs, Sherman has lectured at The National Press Club and the US Coast Guard Command Center in Washington, D.C. He lives in Marshfield, Massachusetts.