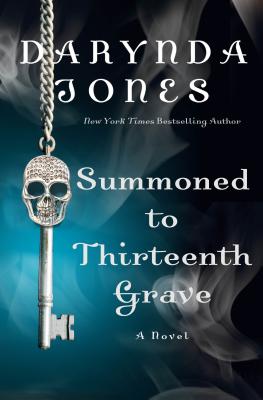 By Darynda Jones
Unavailable. Orders will be auto-cancelled.

This is book number 13 in the Charley Davidson Series series.

Charley Davidson, Grim Reaper extraordinaire, is pissed. She’s been kicked off the earthly plane for eternity—which is exactly the amount of time it takes to make a person stark raving mad. But someone’s looking out for her, and she’s allowed to return after a mere hundred years in exile. Is it too much to hope for that not much has changed? Apparently it is. Bummer.

She’s missed her daughter. She’s missed Reyes. She’s missed Cookie and Garrett and Uncle Bob. Now that she’s back on earth, it’s time to put to rest burning questions that need answers. What happened to her mother? How did she really die? Who killed her? And are cupcakes or coffee the best medicine for a broken heart? It all comes to a head in an epic showdown between good and evil in this final smart and hilarious novel.

New York Times and USA Today bestselling author Darynda Jones has won numerous awards for her work, including a prestigious RITA, a Golden Heart, and a Daphne du Maurier, and her books have been translated into 17 languages. As a born storyteller, Darynda grew up spinning tales of dashing damsels and heroes in distress for any unfortunate soul who happened by, certain they went away the better for it. She penned the international bestselling Charley Davidson series and is currently working on several beloved projects, most notably the Sunshine Vicram Mystery Series with St. Martin's Press and the Betwixt and Between Series of paranormal women's fiction. She lives in the Land of Enchantment, also known as New Mexico, with her husband and two beautiful sons, the Mighty, Mighty Jones Boys.

Praise for The Grave!

"Series fans will miss Jones’s snarky humor as they say goodbye to Charley, Reyes, and the host of memorable supporting characters they’ve come to love over the years." - Publisher's Weekly on Summoned to Thirteenth Grave

"Jones gives fans a classic Charley Davidson novel—a story that is funny, smart, sassy, and set at a break-neck pace." - Booklist on Summoned to Thirteenth Grave

“Sexy, sassy…Jones’s characters, both living and dead, are colorful and endearing.” —The Associated Press on First Grave on the Right

“Jones perfectly balances humor and suspense…Will leave readers eager for her next installment.” —Publishers Weekly (starred review) on Second Grave on the Left

“Charley continues to fascinate.” –Booklist on Third Grave Dead Ahead

“Fourth Grave Beneath My Feet continues to blend paranormal, romance, and mystery better than any other contemporary work out there.”—Heroes and Heartbreakers

“Jones has hit on the perfect recipe for a wisecracking, wickedly funny romp that is edged with truly chilling danger…sexy and mysterious.”—RT Book Reviews on Fifth Grave Past the Light

“Übertalented Jones keeps stirring the pot and throwing in crazy new developments, guaranteed to keep her characters and readers zanily off balance.” –RT Book Reviews on Sixth Grave on the Edge

“Seventh Grave and No Body is Charley at her finest!” –Fresh Fiction

“Crafty Jones shakes things up in a most diabolical way. As always, there is plenty of the weird and wacky, but there is also a heaping dose of high-stakes drama and poignancy. This is one fantastic read!” –RT Book Reviews (4 ½ stars) on Eighth Grave After Dark

“[T]he romance delights. Jones continues to make her Grim Reaper into a layered, fascinating heroine.” –Booklist on The Dirt on Ninth Grave

“Charley has such an endearing personality that you can't help but love her. All the side characters are just as magnetic and lively as Charley, making for an all-around good time.”–Fresh Fiction on The Curse of Tenth Grave

“Charley Davidson is back and she is better than ever! Darynda Jones thrills and excites readers with the eleventh book in the Charley Davidson series.” –Fresh Fiction on Eleventh Grave in Moonlight