If You See Me, Don't Say Hi: Stories (Paperback) 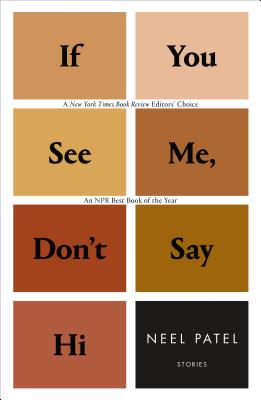 “Neel Patel’s debut short story collection is filled with tales of imperfection and longing, of unfulfilled wishes that fight hard against expectations. His flawed characters know what they risk when their actions don’t match the standard script of perfection they’ve been handed, but their need for love and acceptance always prevails, sometimes with heartbreaking results. Patel’s empathy toward his characters is palpable, as is the effect of his gorgeously rendered sentences. If You See Me, Don’t Say Hiis a wonderful read: necessary, aching, and alive.”
— Mo Daviau, Powell's Books for Home and Garden, Portland, OR

In his sharp, surprising debut, Neel Patel gives voice to our most deeply held stereotypes and then slowly undermines them. His characters, almost all of who are first-generation Indian Americans, subvert our expectations that they will sit quietly by. We meet two brothers caught in an elaborate web of envy and loathing; a young gay man who becomes involved with an older man whose secret he could never guess; three women who almost gleefully throw off the pleasant agreeability society asks of them; and, in the final pair of linked stories, a young couple struggling against the devastating force of community gossip.

If You See Me, Don't Say Hi examines the collisions of old world and new world, small town and big city, traditional beliefs (like arranged marriage) and modern rituals (like Facebook stalking). Ranging across the country, Patel’s stories—empathetic, provocative, twisting, mordantly funny, and defiant—contradict the model minority myth, giving us a bold new portrait of the brown experience, and of America.

Neel Patel is a first-generation Indian American who grew up in Champaign, Illinois. His debut story collection, If You See Me, Don't Say Hi, was a New York Times Book Review Editor’s Choice and was long-listed for the Story Prize and the Aspen Words Literary Prize. He currently lives in Los Angeles. Tell Me How to Be is his debut novel.

Longlisted for the Story Prize and the Aspen Words Literary Prize

An Indie Next Pick for July

“Refreshing…Defiant…Consistently surprising…Patel’s Indian-American characters aren’t reduced to the status of model minorities or 7-11 owners…Where so much fiction about the immigrant family tends to become an exercise in anthropology, a study of inherited customs foisted on a child caught between cultures, Patel’s characters are fundamentally engaged with the world.”
—The New York Times Book Review

“You won’t want to miss…Patel turns his lens on Indian-Americans, addressing with depth and care subjects that are often overlooked or made into caricature: helicopter parents, conflicts between spouses, sibling rivalry, racism, sexual orientation, and identity.”
—Vanity Fair (“Summer Reading: This Season’s Ultimate Fiction List”)

“At turns heartbreaking and uplifting...Neel Patel upends stereotypes, especially Indian-American masculinity. He’s at his most remarkable when illuminating the experience of queer men making sense of their sexuality, and allowing themselves to hope for a happy ending with the men they love.”
—BuzzFeed

“The characters in these 11 stories, nearly all of whom are first-generation Indian immigrants, are gay and straight, highly successful and totally lost, meekly traditional and boldly transgressive, but as they navigate a familiar contemporary landscape of suburban malls and social media stalking, they come off as deeply—and compellingly—American.”
—The Millions (“The Great Book Preview”)

“Aims to unravel stereotypes by introducing surprising, yet relatable characters in each piece.”
—Real Simple (“20 Great Books You Won’t Be Able to Put Down”)

“Patel’s deep sense of empathy—and infuriatingly relatable characters—shines throughout. A melancholic pleasure with a sense of humor.”
—Kirkus (starred review)

“Patel’s empathy toward his characters is palpable, as is the effect of his gorgeously rendered sentences. If You See Me, Don’t Say Hi is a wonderful read: necessary, aching, and alive.”
—Library Journal

“Patel explores universal themes in unexpected ways and excels at portraying nuanced characters in even the briefest stories. Readers in search of a fresh new voice should be on the lookout for Patel.”
—Booklist

“Wrenching…Patel has a knack for depicting the gap between how characters experience their lives and how they are expected to be seen—and how those gaps can widen into life-changing fractures. This is a perceptive, moving collection.”
—Publishers Weekly

"If You See Me, Don't Say Hi bristles with unexpected meetings and reunions, recognitions and failed recognitions, passions and estrangements of all kinds. These stories have a sharp eye for the complexities of modern life, but Neel Patel writes with the wisdom and compassion of an old soul."
—Celeste Ng, New York Times bestselling author of Little Fires Everywhere

“A joy to read, reminiscent of Jhumpa Lahiri and David Ebershoff. As much as these remarkable stories have Indian-American characters at the center, they are simply human, tenderly told. Without moralizing or sentimentality, Patel writes about forgiveness and compassion, and the freedom to be flawed. What exquisite writing. What a tremendous talent.”
—Imbolo Mbue, New York Times bestselling author of Behold the Dreamers

"It’s possible that no one ever told Neel Patel that Indians in America are supposed to be a model minority. How else to explain these stories, full of terrible spouses, warring siblings, unapologetic liars, and naive kids, searching for happiness, love, or maybe just sex? In stories that are moving, thoughtful, entertaining, and discomfiting all at once, Patel upends what we think the experience of Indians in America looks like. It’s about time."
—Rumaan Alam, author of Rich and Pretty

“In If You See Me, Don’t Say Hi, Neel Patel pulls off something that I’ve rarely seen: stories about Indians in America which feel unique and thrilling without relying on stereotypes or tropes. His characters manage to be both sympathetic and deeply flawed, complicated people who don’t give you clean answers. His stories will make you laugh, then cry, then feel uncomfortable, then feel free, all within a few pages. When you’re done reading, you’ll want to flip back to the beginning and read it all over again.”
—Scaachi Koul, author of One Day We’ll All Be Dead and None of This Will Matter