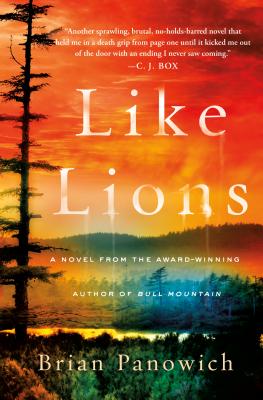 "A book filled with unforgettable characters and a tension that heightens with every chapter." —The Wall Street Journal

A powerful follow up to multiple award-winning debut Bull Mountain.

Brian Panowich burst onto the crime fiction scene in 2015, winning awards and accolades from readers and critics alike for his smoldering debut, Bull Mountain. Now with Like Lions, he cements his place as one of the outstanding new voices in crime fiction.

Clayton Burroughs is a small-town Georgia sheriff, a new father, and, improbably, the heir apparent of Bull Mountain’s most notorious criminal family.

As he tries to juggle fatherhood, his job and his recovery from being shot in the confrontation that killed his two criminally-inclined brothers last year, he’s doing all he can just to survive. Yet after years of carefully toeing the line between his life in law enforcement and his family, he finally has to make a choice.

When a rival organization makes a first foray into Burroughs territory, leaving a trail of bodies and a whiff of fear in its wake, Clayton is pulled back into the life he so desperately wants to leave behind. Revenge is a powerful force, and the vacuum left by his brothers’ deaths has left them all vulnerable. With his wife and child in danger, and the way of life in Bull Mountain under siege for everyone, Clayton will need to find a way to bury the bloody legacy of his past once and for all.

Brian Panowich is an award winning author, a Georgia firefighter, and a father to four incredible children. His first novel, Bull Mountain, was a Los Angeles Times Book Prize finalist, ITW Thriller Award winner for Best First Novel, Southern Book Prize winner, and a finalist for both the Anthony and the Barry Awards. He lives in Georgia with his family.

“The thrills keep coming . . . In the vein of Grisham and Burke, Panowich zips readers along with action backed by delightfully rhythmic storytelling.” — Garden and Gun

“Excellent . . . It's the emotional complexity of Burroughs . . . as well as the brass knuckle punch of an ending that will have readers applauding. This is hillbilly noir at its finest.” —Publishers Weekly, starred review

“Brian Panowich makes a triumphant return to Bull Mountain, Georgia, in his second novel, “Like Lions,” as he continues to mix crime fiction with a violent family drama, perfectly melding characters with a sense of place . . . moves at a brisk clip, leading to a stunning, yet believable, finale.” — Associated Press

“Like Lions is excellent fiction, period. Buy, read, and enjoy.” — The New York Journal of Books

“Panowich is a terrific storyteller with a way with words . . . Fine country noir.” — Don Crinklaw, Booklist

“Brian Panowich’s glorious return to Bull Mountain is another sprawling, brutal, no-holds-barred novel that held me in a death grip from page one until it kicked me out of the door with an ending I never saw coming.”—C.J. Box

“If Elmore Leonard and Flannery O’Connor had a love child who grew up reading William Faulkner, pulp fiction, and a Shakespearean tragedy or two, he’d write like Brian Panowich. His characters are knotty, tangled people who try and fail and frustrate yet keep going, fueled by something as bone deep as family or fear, or both…You’re in for a hell of a ride.” —Christopher Swann, author of Shadow of the Lions

"A satisfying and smartly constructed book whose time-shifting sequences build suspense even as they parcel out telling revelations. Once events are in full play, there’s no turning back.”— The Wall Street Journal

“[Brian Panowich] pulls off [a] daunting undertaking with astounding success . . . The storytelling is mesmerizing." — The New York Times Book Review

"One of the best multi-generational family sagas in years.” — The Huffington Post

“Bull Mountain is a stone gas and a stone winner! It’s brother-versus-brother in the dope-damned South. This first novel has it all: moonshine, maryjane and mayhem! Read this book now – and succumb to a startling new talent.” – James Ellroy, author of Perfidia