A Conjuring of Light Collector's Edition: A Novel (Shades of Magic #3) (Hardcover) 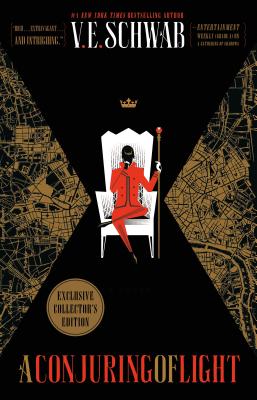 This is book number 3 in the Shades of Magic series.

The epic conclusion to the New York Times bestselling Shades of Magic series, now in a beautiful collector's edition with exclusive features. With a revamped cover and reading ribbon, this edition will also feature the following bonus material:

Londons fall and kingdoms rise while darkness sweeps the Maresh Empire—and the fraught balance of magic blossoms into dangerous territory while heroes and foes struggle alike.

The direct sequel to A Gathering of Shadows, and the final book in the Shades of Magic epic fantasy series, A Conjuring of Light sees Schwab reach a thrilling culmination concerning the fate of beloved protagonists—and old enemies.

"Flawless prose...the bittersweet conclusion is a fitting one for a fantastic, emotionally rich series that redefines epic." —Publishers Weekly, starred review, on A Conjuring of Light

"Adventure beckons, and Schwab's smart, exhilarating story doesn't let go until the very end. And, not even then." —Shelf Awareness for Readers on A Conjuring of Light

"The book is still filled with incident and emotion, with difficulty and heartbreak and anger. And it frankly feels subversive." —NPR on A Gathering of Shadows

"[This has] all the hallmarks of a classic work of fantasy. Its plot is gripping. Its characters are memorable. [Its setting] is otherworldly yet believable. Schwab has given us a gem of a tale...This is a book to treasure." —Deborah Harkness, New York Times bestselling author of The All Souls trilogy

"Full of magic, intrigue, adventure, deception, a bit of piracy...this will engage both adult and young adult fantasy readers alike.” —Booklist on A Darker Shade of Magic