Lifestyles of Gods and Monsters (CD-Audio) 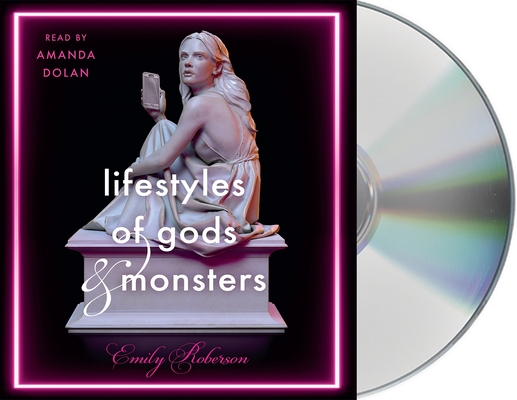 By Emily Roberson, Amanda Dolan (Read by)
$44.99
Backordered. Place an order and we will let you know when to expect your book.

""Imagine, if you will, a hunky Theseus on a certain family's reality show. Throw in Ariadne and the minotaur, and you get an unintentionally hilarious and surprisingly thought provoking myth meets reality TV mash-up for the ages."

"Hold onto your hat! Greek mythology meets reality TV in this audiobook--with a bit of dystopian novel thrown in, as well. Narrator Amanda Dolan keeps the story straight for listeners with her flexible voicings of the many extreme characters...With quick transitions in tone and timbre, Dolan adds to the depth and believability of this cultural pastiche." — AudioFile Magazine

Greek mythology meets the Kardashians in Emily Roberson's Lifestyles of Gods and Monsters, a fresh, fast-paced young adult debut about celebrity culture, family dynamics, and finding love amidst it all.

Sixteen-year-old Ariadne’s whole life is curated and shared with the world. Her royal family’s entertainment empire is beloved by the tabloids, all over social media, and the hottest thing on television. The biggest moneymaker? The Labyrinth Contest, a TV extravaganza in which Ariadne leads fourteen teens into a maze to kill a monster. To win means endless glory; to lose means death. In ten seasons, no one has ever won.

When the gorgeous, mysterious Theseus arrives at the competition and asks Ariadne to help him to victory, she doesn’t expect to fall for him. He might be acting interested in her just to boost ratings. Their chemistry is undeniable, though, and she can help him survive. If he wins, the contest would end for good. But if she helps him, she doesn’t just endanger her family’s empire—the monster would have to die. And for Ariadne, his life might be the only one worth saving.

Ariadne’s every move is watched by the public and predestined by the gods, so how can she find a way to forge her own destiny and save the people she loves?

Emily Roberson has a master’s degree in English from the University of Texas at Austin. She lives in Little Rock, Arkansas, with her family. Lifestyles of Gods and Monsters is her debut novel.