Rhinos in Nebraska: The Amazing Discovery of the Ashfall Fossil Beds (Hardcover) 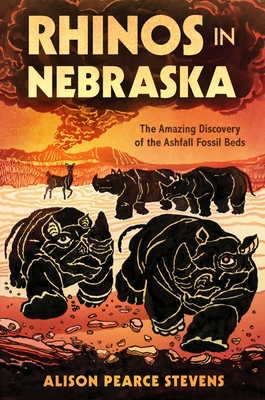 Twelve million years ago, rhinos, elephants, and camels roamed North America. They would gather at nearby watering holes—eating, drinking, and trying not to become someone else’s lunch. But one day, in what we now know as Nebraska, everything changed. The explosion of a supervolcano a thousand miles away sent a blanket of ash that buried these animals for millennia.

Until 1953, when a seventeen-year-old farm worker made an unbelievable discovery.

Rhinos in Nebraska tells the story of the Ashfall Fossil Beds, where more than two hundred perfectly preserved fossils have been found. Step into the past with author Alison Pearce Stevens and uncover the mysteries of Ashfall.

Alison Pearce Stevens, Ph.D., has written more than one hundred science articles for children and coauthored four National Geographic Kids books. She is also the author of Rhinos in Nebraska, which she found inspiration for through her work at the University of Nebraska State Museum.

Illustrator Matt Huynh is a New York-based artist who takes inspiration from Eastern sumi-e caligraphy and Western comic books. His work has been exhibited by the Museum of Modern Art in New York, The Smithsonian, and The Sydney Opera House, among others.