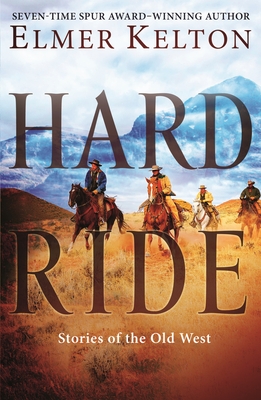 Each of Elmer Kelton’s superb stories of the West showcase the strength and power western spirit. They are filled with marvelous characters—from a rodeo clown who seeks redemption via romance, to an outlaw who comes to the aid of ranchers with no other recourse to justice. Powerful Western women feature as importantly as the menfolk here, including a cattle buyer’s daughter who can hold her own with any man on the trail, a renowned lady outlaw who rules her gang with her gun, and a judge’s daughter who is determined to end local mob rule, as “the day of the gun is almost over.” You will meet characters whose devotions and decisions enthrall you long after you put the book down.

Imbued with an adventurous spirit, Hard Ride is filled with many heartfelt glimpses into the authentic experience of the American West. These stories encompass an enormous array of scenes from the early days of the Wild West into the twentieth century. Readers of all ages can enjoy these tales, each one filled with a passion for life that’s as vast as the Texas prairie.

“You can never go wrong if .. . you pick up a title by Elmer Kelton.”
—American Cowboy

“A genuine craftsman with an ear for dialogue and, more importantly, an understanding of the human heart.”
—Booklist

“One of America’s premier Western writers.”
—The Dallas Morning News