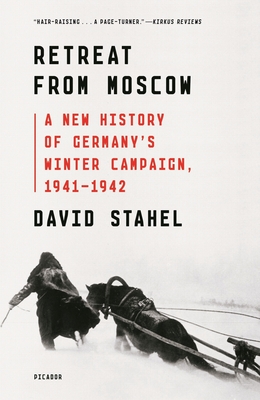 Germany’s winter campaign of 1941–1942 is commonly seen as its first defeat. In Retreat from Moscow, a bold, gripping account of one of the seminal moments of World War II, David Stahel argues that instead it was its first strategic success in the East. The Soviet counteroffensive was in fact a Pyrrhic victory. Despite being pushed back from Moscow, the Wehrmacht lost far fewer men, frustrated its enemy’s strategy, and emerged in the spring unbroken and poised to recapture the initiative.

Hitler’s strategic plan called for holding important Russian industrial cities, and the German army succeeded. The Soviets as of January 1942 aimed for nothing less than the destruction of Army Group Center, yet not a single German unit was ever destroyed. Lacking the professionalism, training, and experience of the Wehrmacht, the Red Army’s offensive attempting to break German lines in countless head-on assaults led to far more tactical defeats than victories.

Using accounts from journals, memoirs, and wartime correspondence, Stahel takes us directly into the Wolf’s Lair to reveal a German command at war with itself as generals on the ground fought to maintain order and save their troops in the face of Hitler’s capricious, increasingly irrational directives. Excerpts from soldiers’ diaries and letters home paint a rich portrait of life and death on the front, where the men of the Ostheer battled frostbite nearly as deadly as Soviet artillery. With this latest installment of his pathbreaking series on the Eastern Front, David Stahel completes a military history of the highest order

David Stahel is the author of over a half dozen books about World War II, several focusing on Nazi Germany’s war against the Soviet Union (including Operation Typhoon and The Battle for Moscow). He completed an MA in war studies at King’s College London in 2000 and a PhD at the Humboldt-Universität zu Berlin in 2009. In his research he has concentrated primarily on the German military in World War II. Dr. Stahel is a senior lecturer in European history at the University of New South Wales, and he teaches at the Australian Defence Force Academy.

"An engaging, fine-grained account of an epic struggle, one that restores contingency and perspective to a battle that has been mythologized for too long . . . Mr. Stahel describes these days brilliantly, switching among various levels of command while reminding us of the experiences of the soldiers on the ground and the civilians caught up in the Nazi 'war of annihilation' . . . [Readers] will surely be thankful to him for taking a fresh look at a crucial series of battles about which we wrongly thought we already knew everything there was to know." —Brendan Simms, The Wall Street Journal

“Stahel has done a vast amount of research . . . His arguments are convincing, his prose always lucid . . . This is a serious work of scholarship: a well-argued piece of revisionist history, and a reminder that, for all the misery and slaughter in the West, it was even worse in the East.” —Tim Bouverie, Air Mail

"Stahel has created a well-researched, compelling account of an oft -misunderstood period of the Second World War . . . Stahel renders the conflict in exquisite detail, breaking down the fighting to days and even hours to provide a blow-by-blow analysis. . . a formidable piece of scholarship, unafraid to tackle assumptions about the war and build a more complex, nuanced picture of the German Army in 1941-1942. It is a text driven by perspective: those of the German high command, of ordinary soldiers, and of military historians concerned to conceptualise victory in war." --Alexander Izza, Military History Matters