The Little Princesses: The Story of the Queen's Childhood by Her Nanny, Marion Crawford (Paperback) 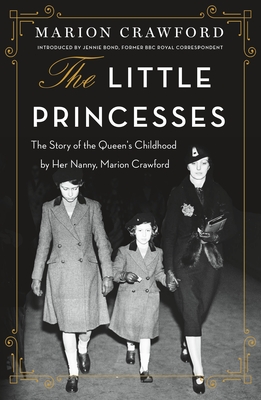 Originally published in 1950, The Little Princesses was the first account of British Royal life inside Buckingham Palace as revealed by Marion Crawford, who served as governess to princesses Elizabeth and Margaret.

A twenty-two year old teacher recruited to look after the Duke and Duchess of York’s young daughters in 1931, Marion Crawford—affectionately known as “Crawfie” by her charges—spent sixteen years with the Royal family as the children’s governess. From King Edward VIII’s abdication of the throne in order to marry American divorcée Wallis Simpson and King George VI’s subsequent crowning, through World War II, and all the way to Elizabeth’s courtship and marriage to Prince Philip, Duke of Edinburgh, Crawfie’s memoir offers an intimate and revelatory perspective of Elizabeth and Margaret’s childhood during one of the most momentous eras in British history.

Initially honored as a Commander of the Royal Victorian Order for her loyal service to the crown, Crawfie was later demonized by the press and ostracized by the royal family for the rest of her life as a result of The Little Princesses’ publication. When compared to the modern media’s relentless obsession with the House of Windsor, Crawfie’s touching account of Queen Elizabeth and Princess Margaret’s youth presents a poignant reminder of how much life has changed for the British Royals.

And an Introduction by Jennie Bond, BBC Royal Correspondent

Marion Crawford, or "Crawfie," as she was known to young Princess Elizabeth and Princess Margaret, was born in the Scottish countryside and studied teaching at the Moray House Training College in Edinburgh. In the early 1930s, she became governess to the daughters of the Duke and Duchess of York, little suspecting that she would devote the next sixteen years to nurturing her future Queen. Her account of life as a royal governess originally appeared in American magazines, but soon became a front-page sensation on both sides of the Atlantic. The first edition of The Little Princesses was published in 1950, and although it created a scandal, it was nonetheless a valuable social history and the first inside account of life at Buckingham Palace. Crawford died in 1988, having never been forgiven by the royal family for writing her book.

Jennie Bond has been following the Royal Family as the BBC’s Royal correspondent for thirteen years. In that time, she has covered many momentous events---among them, three marriage breakdowns, Camillagate, the Queen’s annus horribilis, and the death of Diana, Princess of Wales. Bond has written two other books: Elizabeth: Fifty Glorious Years and Reporting Royalty: Behind the Scenes with the BBC’s Royal Correspondent.

"Comprises a sweet account of the girls’ life before and after the abdication that would irrevocably change their lives – and showcases the early foundations of their radically different characters." —Vogue

"A fascinating period piece, as well as a treasure trove of beady little insights into the characters of two sharply contrasting sisters, written with a keen eye by the Royal servant who knew them best." —Craig Brown, New York Times bestselling author of Ninety-Nine Glimpses of Princess Margaret

"If you really want to find out the true story of the Princesses Elizabeth and Margaret, you must read this account. Written with affection, respect, and above all, love." —Brian Hoey, distinguished Royal journalist and author of more than twenty books on the Royals including Not in Front of the Corgis

"It’s well worth a read to hear the details about taking care of a young Princess Elizabeth and Princess Margaret; the time they spent at Windsor Castle during WWII is especially interesting." —Royal Central