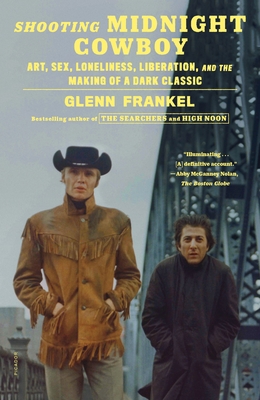 “Much more than a page-turner. It’s the first essential work of cultural history of the new decade.” —Charles Kaiser, The Guardian

The Pulitzer Prize–winning journalist and New York Times bestselling author of the behind-the-scenes explorations of the classic American Westerns High Noon and The Searchers now reveals the history of the controversial 1969 Oscar-winning film that signaled a dramatic shift in American popular culture.

Director John Schlesinger’s Darling was nominated for five Academy Awards, and introduced the world to the transcendently talented Julie Christie. Suddenly the toast of Hollywood, Schlesinger used his newfound clout to film an expensive, Panavision adaptation of Far from the Madding Crowd. Expectations were huge, making the movie’s complete critical and commercial failure even more devastating, and Schlesinger suddenly found himself persona non grata in the Hollywood circles he had hoped to conquer.

Given his recent travails, Schlesinger’s next project seemed doubly daring, bordering on foolish. James Leo Herlihy’s novel Midnight Cowboy, about a Texas hustler trying to survive on the mean streets of 1960s New York, was dark and transgressive. Perhaps something about the book’s unsparing portrait of cultural alienation resonated with Schlesinger. His decision to film it began one of the unlikelier stories in cinematic history, centered on a city that seemed, at first glance, as unwelcoming as Herlihy’s novel itself.

Glenn Frankel’s Shooting “Midnight Cowboy” tells the story of a modern classic that, by all accounts, should never have become one in the first place. The film’s boundary-pushing subject matter—homosexuality, prostitution, sexual assault—earned it an X rating when it first appeared in cinemas in 1969. For Midnight Cowboy, Schlesinger—who had never made a film in the United States—enlisted Jerome Hellman, a producer coming off his own recent flop and smarting from a failed marriage, and Waldo Salt, a formerly blacklisted screenwriter with a tortured past. The decision to shoot on location in New York, at a time when the city was approaching its gritty nadir, backfired when a sanitation strike filled Manhattan with garbage fires and fears of dysentery.

Much more than a history of Schlesinger’s film, Shooting “Midnight Cowboy” is an arresting glimpse into the world from which it emerged: a troubled city that nurtured the talents and ambitions of the pioneering Polish cinematographer Adam Holender and the legendary casting director Marion Dougherty, who discovered both Dustin Hoffman and Jon Voight and supported them for the roles of “Ratso” Rizzo and Joe Buck—leading to one of the most intensely moving joint performances ever to appear on-screen. We follow Herlihy himself as he moves from the experimental confines of Black Mountain College to the theaters of Broadway, influenced by close relationships with Tennessee Williams and Anaïs Nin, and yet unable to find lasting literary success.

By turns madcap and serious, and enriched by interviews with Hoffman, Voight, and others, Shooting “Midnight Cowboy”: Art, Sex, Loneliness, Liberation, and the Making of a Dark Classic is not only the definitive account of the film that unleashed a new wave of innovation in American cinema, but also the story of a country—and an industry—beginning to break free from decades of cultural and sexual repression.

Glenn Frankel worked for many years at The Washington Post, winning a Pulitzer Prize in 1989. He has taught journalism at Stanford University and the University of Texas at Austin, where he directed the School of Journalism. He has won the National Jewish Book Award, was a finalist for the Los Angeles Times Book Prize, and is a Motion Picture Academy Film Scholar. He is the bestselling author of The Searchers and High Noon, and lives in Arlington, Virginia.

"This tremendous volume offers the most detailed explication of how a movie is made that I have ever read . . . When Frankel praises [director John Schlesinger] for his 'natural curiosity, humor' and 'keen eye for quirky stories and intriguing characters,' he could be talking about himself . . . What takes this book from good to great is his graceful writing and the intelligence [Frankel] brings to everything he examines." —Charles Kaiser, The Guardian

"Frankel does a remarkable job telling the story of how [Midnight Cowboy] happened. He's such a gifted storyteller that you don't even have to be familiar with the film to find the book fascinating . . . A must-read for anyone interested in cinematic history, and an enthralling look at Schlesinger's 'dark, difficult masterpiece.'" —Michael Schaub, NPR

"With Shooting Midnight Cowboy, Pulitzer Prize-winning journalist Glenn Frankel completes an illuminating trilogy about men and their cinematic milestones . . . As with his previous two studies, the new book employs a wide lens, taking in not only John Schlesinger’s role in getting the movie made but also those of producer, screenwriter, cast, crew, and an all-but-forgotten novelist . . . [A] definitive account." —Abby McGanney Nolan, The Boston Globe

"Frankel is both exacting and tender in his depiction of [his subjects] . . . He is that increasingly rare and precious thing: a commentator who recognizes that people and their relationships are infinitely complex . . . This book is indispensable . . . At once addictively readable and profoundly humane." —Hannah McGill, Sight & Sound

"Frankel’s book is generous with context . . . [it shows] us the 'what if's and the 'but for's hiding in the backstory of the finished product." —Louis Menand, The New Yorker

"Through rich accounts of the movie’s creators and analysis of its cultural context, Pulitzer Prize–winning journalist Frankel makes clear why the film mattered, and still does. Electrifying reading—and the gold standard for what film writing should be." —Library Journal

"[Shooting Midnight Cowboy is] doggedly reported and researched, built around collision courses between ambitious artists working in this most collaborative of mediums . . . Frankel puts it all together with narrative verve, telling a propulsive tale about creativity, commerce and loss." —Chris Vognar, USA Today

"[Frankel] is a smooth writer and sure-footed narrator who uses this volume to excavate the cultural landscape of postwar America . . . He uncovers the rich details that gave the movie its texture and authenticity . . . [Shooting Midnight Cowboy] will satisfy anyone interested in how a long-shot movie about two underdogs became an American original." —James S. Hirsch, The Washington Post

"In this outstanding work . . . [Glenn Frankel] covers every facet of [Midnight Cowboy's] creation . . . In a canny move, Frankel places the film in historical context, detailing major world events at the time of the shoot, including the Vietnam War, New York’s ‘downward path to seemingly terminal decline,’ and the Stonewall riots . . . Interviews with the film’s surviving principals add immediacy, and descriptions of small production details enhance the book’s power . . . A rare cinema book that is as mesmerizing as its subject.” —Kirkus Reviews (starred review)

“A vivid chronicle . . . Frankel offers behind-the-scenes anecdotes . . . [and] also renders the social upheaval of the era—the Stonewall riots, antiwar protests, racial unrest—and the window between the collapse of old Hollywood’s heavy censorship and the rise of the profit-oriented blockbusters when Midnight Cowboy was made. This enthralling account of a boundary-breaking film is catnip for film buffs.” —Publishers Weekly (starred review)

"Tackling questions of censorship and the MPAA ratings, bravura performances by Jon Voight and Dustin Hoffman, the costumes, the soundtrack, and the film's coronation at the 1970 Academy Awards, Frankel expertly brings it all together . . . An in-depth, exquisite biography of a legendary film, and a must-read for cinephiles." —Peter Thornell, Library Journal (starred review)

“From the author of the splendid The Searchers (2013) comes another making-of book that transcends the genre. This is no mere story of the production of [Midnight Cowboy]; instead, it offers in-depth portraits of the man who created the characters of Joe Buck and Ratso Rizzo . . . and the men who gave them cinematic life . . . Frankel, who won a Pulitzer in 1989 for international reporting, brings a reporter’s eye to the story.” —David Pitt, Booklist (starred review)

"Through the prism of a compassionate, taboo-busting movie, Glenn Frankel has given us a master class in filmmaking that doubles as a rich cultural history of a tumultuous epoch. Shooting Midnight Cowboy takes us from Swinging London to gritty late sixties New York to the creative ferment of the New Hollywood, in a consistently entertaining tour full of vibrant, indelible characters. I loved this book." —Margaret Talbot, staff writer at The New Yorker and author of The Entertainer: Movies, Magic, and My Father's Twentieth Century

"The 'biography' of a film—how it got made, the background of everyone involved, what we made of it then and what we make of it now—may be my favorite genre, and Glenn Frankel is unexcelled as a master of the form. Here with his usual meticulous research he outdoes himself with Midnight Cowboy, a film particularly resonant for the taboos it broke and its surprising success at a transitional moment in our cultural history. All the backstories provide rich reading, unearthing little-known facts that illuminate whole careers. Shooting Midnight Cowboy is many things, but most thrillingly it is the story of how three outsiders—gay novelist, gay director and blacklisted screenwriter—furthered the acceptance of gay themes in books and movies by making a film about human loss." —Molly Haskell, author of Steven Spielberg: A Life in Films and From Reverence to Rape

"Midnight Cowboy was one of my favorite movies ever—dark, soulful, with an odd couple of 'losers' who won at the game of friendship. But Glenn Frankel's book goes far beyond doing the epic film justice. Creating a compelling narrative of a vibrant, roiling, unexpected chain of creatives that spanned from Black Mountain College in 1947 to the movie's release at the tail end of the desolate sixties in Manhattan, Frankel has done that rare, great thing: shown us a world within a world of literary, filmic, and human longing and linked singular gems of history into a fresh and truthful mosaic." —Sheila Weller, New York Times bestselling–author of Girls Like Us and Carrie Fisher: A Life on the Edge

"In Shooting Midnight Cowboy, Glenn Frankel illuminates the cultural forces that fed the creation of an iconic 1960s classic. This perceptive work elegantly captures how a movie can embody a moment in time." —Julie Salamon, author of The Devil's Candy and An Innocent Bystander