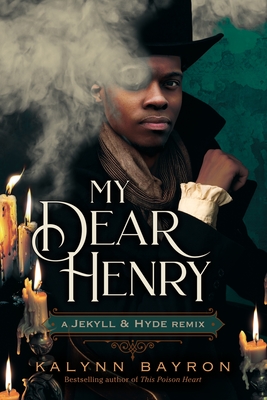 A teen boy tries to discover the reason behind his best friend's disappearance—and the arrival of a mysterious and magnetic stranger—in misty Victorian London, in Kalynn Bayron's My Dear Henry, a gothic YA remix of Dr. Jekyll & Mr. Hyde, sixth in the Remixed Classics series.

London, 1885. Gabriel Utterson, a 17-year-old law clerk, has returned to London for the first time since his life— and that of his dearest friend, Henry Jekyll—was derailed by a scandal that led to his and Henry's expulsion from the London Medical School. Whispers about the true nature of Gabriel and Henry's relationship have followed the boys for two years, and now Gabriel has a chance to start again.

But Gabriel doesn't want to move on, not without Henry. His friend has become distant and cold since the disastrous events of the prior spring, and now his letters have stopped altogether. Desperate to discover what's become of him, Gabriel takes to watching the Jekyll house.

In doing so, Gabriel meets Hyde, a a strangely familiar young man with white hair and a magnetic charisma. He claims to be friends with Henry, and Gabriel can't help but begin to grow jealous at their apparent closeness, especially as Henry continues to act like Gabriel means nothing to him.

But the secret behind Henry's apathy is only the first part of a deeper mystery that has begun to coalesce. Monsters of all kinds prowl within the London fog—and not all of them are out for blood...

Kalynn Bayron is the bestselling author of the award-winning YA fantasy Cinderella Is Dead and This Poison Heart. She is a classically trained vocalist and when she’s not writing you can find her listening to Ella Fitzgerald on loop, attending the theater, watching scary movies, and spending time with her kids. She currently lives in upstate New York with her family.

"'Fun' doesn’t even begin to describe this rich and imaginative retelling of Treasure Island. ... It’s obvious that this book was a labor of love, which made it all the more enjoyable to read. Pirate stories don’t get much better than this." —Hypable, on A Clash of Steel: A Treasure Island Remix by C.B. Lee

"Morrow’s ability to take the lingering stain of slavery on American history and use it as a catalyst for unbreakable love and resilience is flawless. That she has remixed a canonical text to do so only further illuminates the need to critically question who holds the pen in telling our nation’s story." —Booklist, starred review, on So Many Beginnings: A Little Women Remix by Bethany C. Morrow

"Morrow's nuanced take on what life was like for newly freed Black people at this time will prompt readers to reconsider the simplistic good vs. evil, North vs. South mythologies that characterize too many Civil War narratives. ... Alcott fans and newcomers alike will find much to appreciate in Morrow's sophisticated remix." —BookPage, starred review, on So Many Beginnings: A Little Women Remix by Bethany C. Morrow

"Impressive ... Via delicately written characterizations, each March woman exemplifies the notion that the wounds of bondage don’t disappear simply because freedom is at hand, and the racist catalyst of enslavement doesn’t disappear with the stroke of a pen, as a beloved story gains new meaning through the lens of enduring Black resilience, love, and hope." —Publishers Weekly, starred review, on So Many Beginnings: A Little Women Remix by Bethany C. Morrow

"Travelers Along the Way is the Robin Hood retelling I did not know I wanted. Deeply researched and masterfully written, here is a story that’s not only thrilling, but also delightfully clever! Rahma al-Hud and her band of merry misfits will appeal to history buffs and adventure seekers alike. A must read!" —Tanaz Bhathena, author of A Girl Like That and Hunted by the Sky, on Travelers Along the Way: A Robin Hood Remix by Aminah Mae Safi

"If you love heists, found family, and stealing from the rich and giving to the poor, then put Aminah Mae Safi's heartfelt and humorous take on Robin Hood at the very top of your TBR. Sisterhood, cunning disguises, and a bit of horse thievery: Travelers Along the Way is an adventure story that has it all." —Jodi Meadows, New York Times-bestselling co-author of My Lady Jane, on Travelers Along the Way: A Robin Hood Remix by Aminah Mae Safi

"A verdant read as rich as the greenery within it, This Poison Heart will wrap its vines around you and never let go." —Kayla Ancrum, author of The Wicker King and Darling, on This Poison Heart

"Bayron weaves science and Greek mythology into a captivating lore that lends weight to this fantastical contemporary story. She conjures entertaining and realistic dialogue and attentive characterization, while incisive descriptions and sumptuous prose evoke a wonderfully gothic atmosphere." —Publishers Weekly, starred review, on This Poison Heart

"This Poison Heart masterfully weaves a unique story grounded in the depths of Greek mythology and Black girlhood, ideal for lovers of folklore or those who enjoy the thrill of a well-paced and unanticipated adventure." —Booklist, starred review, on This Poison Heart

"Kalynn Bayron does more than re-write a fairy-tale . . . She breaks it apart and rebuilds it into a wholly original and captivating story where girls finally decide for themselves who lives happily ever after." —Brigid Kemmerer, New York Times-bestselling author of A Curse So Dark and Lonely, on Cinderella Is Dead

"Flipping the Cinderella tale on its head, Bayron’s take challenges patriarchy with kick-butt heroines and a counter-story that will forever change how readers perceive fairy tales." —Booklist, starred review, on Cinderella Is Dead