We Need New Stories: The Myths that Subvert Freedom (Hardcover) 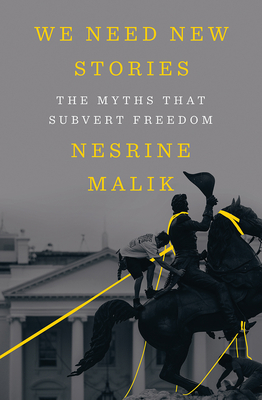 Named a Most Anticipated Book of Spring 2021 by Publishers Weekly

A rigorous examination of six political myths used to deflect and discredit demands for social justice.

In 2016, presidential candidate Donald Trump declared: "I think the big problem this country has is being politically correct." Reeling from his victory, Democrats blamed the corrosive effect of "identity politics." When banned from Twitter for inciting violence, Trump and his supporters claimed that the measure was an assault on "free speech." In We Need New Stories, Nesrine Malik explains that all of these arguments are political myths—variations on the lie that American values are under assault.

Exploring how these and other common political myths function, she breaks down how they are employed to subvert calls for equality from historically disenfranchised groups. Interweaving reportage with an incendiary analysis of American history and politics, she offers a compelling account of how calls to preserve "free speech" are used against the vulnerable; how a fixation with "wokeness," "political correctness," and "cancel culture" is in fact an organized and well-funded campaign by elites; and how the fear of racial minorities and their “identity politics” obscures the biggest threat of all—white terrorism. What emerges is a radical framework for understanding the crises roiling American contemporary politics.

Nesrine Malik is an award-winning British-Sudanese columnist and features writer for the Guardian. We Need New Stories is her first book. She lives in London.

Malik invites readers to analyze the media environment and political and cultural landscape of the early 21st century, with a keen, critical eye. … This volume is worth reading and rereading. ... Readers seeking a high-level analysis of political discourse will most appreciate Malik’s work.
— Sarah Schroeder - Library Journal (starred review)

A persuasive debunking of political and cultural myths that impede social justice in the U.S. and U.K. …This is a lucid reminder that the fight for equality is a battle of ideas.
— Publishers Weekly

Malik presents fierce opinions and cogent observations that deliver a deeply intelligent and powerfully provocative work that calls into question long-held beliefs of both the left and the right.
— Booklist