Free: Coming of Age at the End of History (Paperback) 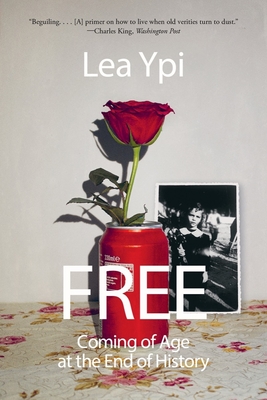 In a memoir that is by turns “bitingly, if darkly, funny … and truly profound” (Max Strasser, New York Times), Lea Ypi reflects on “freedom” as she recounts living through the end Communism in the Balkans as a child. “This is history brought memorably and powerfully to life” (Tara Westover, author of Educated).

Family and nation formed a reliable bedrock of security for precocious 11-year-old Lea Ypi. She was a Young Pioneer, helping to lead her country toward the future of perfect freedom promised by the leaders of her country, the People’s Socialist Republic of Albania. Then, almost overnight, the Berlin Wall fell and the pillars of her society toppled. The local statue of Stalin, whom she had believed to be a kindly leader who loved children, was beheaded by student protestors.

Uncomfortable truths about her family’s background emerged. Lea learned that when her parents and neighbors had spoken in whispers of friends going to “university” or relatives “dropping out,” they meant something much more sinister. As she learned the truth about her family’s past, her best friend fled the country. Together with neighboring post-Communist states, Albania began a messy transition to join the “free markets” of the Western world: a dystopia of pyramid schemes, organized crime, and sex trafficking. Her father, despite his radical left-wing convictions, was forced to fire workers; her mother became a conservative politician on the model of Margaret Thatcher. Lea’s typical teen concerns about relationships and the future were shot through with the existential: the nation was engulfed in civil war.

Ypi’s outstanding literary gifts enable her to weave together this colorful, tumultuous coming-of-age story in a time of social upheaval with thoughtful, fresh, and invigorating perspective on the relation between the personal and the political, and on deep questions about freedom: What does freedom consist of, and for whom? What conditions foster it? Who among us is truly free?

Lea Ypi is professor in political theory at London School of Economics, and adjunct associate professor in philosophy at the Australian National University, with expertise in Marxism and critical theory. She lives and works in London.

Ypi is a beautiful writer and a serious political thinker, and in just a couple hundred readable pages, she takes turns between being bitingly, if darkly, funny (she skewers Stalinism and the World Bank with equal deadpan) and truly profound...Free is meant to inspire.

Free is astonishing. Lea Ypi has a natural gift for storytelling. It brims with life, warmth, and texture, as well as her keen intelligence. A gripping, often hilarious, poignant, psychologically acute masterpiece, and the best book I’ve read so far this year.

Illuminating and subversive, Free asks us to consider what happens to our ideals when they come into contact with imperfect places and people, and what can be salvaged from the wreckage of the past.

Written by an intellectual with storytelling gifts, Free makes life on the ground in modern-day Albania vivid and immediate.

— Vivian Gornick, author of The Odd Woman and the City

A new classic that bursts out of the global silence of Albania to tell us human truths about the politics of the past hundred years… revelation after revelation—both familial and national—as if written by a master novelist. As if it were, say, a novella by Tolstoy. That this very serious book is so much fun to read is a compliment to its graceful, witty, honest writer. A literary triumph.
— Amy Wilentz, author of Farewell, Fred Voodoo: A Letter From Haiti

Lea Ypi is a pathbreaking philosopher who is also becoming one of the most important public thinkers of our time.… This extraordinary book is both personally moving and politically revolutionary. If we take its lessons to heart, it can help to set us free.
— Martin Hägglund, author of This Life

Free is one of those very rare books that shows how history shapes people’s lives and their politics. Lea Ypi is such a brilliant, powerful writer that her story becomes your story.

— Ivan Krastev, coauthor of The Light That Failed

Written by one of Europe’s foremost left-wing thinkers, this is an unmissable book for anyone engaged in the politics of resistance.
— Paul Mason, author of Postcapitalism

This extraordinary coming-of-age story is like an Albanian Educated, but it is so much more than that.

A lyrical memoir, of deep and affecting power, of the sweet smell of humanity mingled with flesh, blood, and hope.
— Philippe Sands, author of The Ratline

The author’s narrative voice is stunning, expertly balancing humor, pathos, and deep affection for the characters and places that defined her past. She is adept at immersing readers in her childhood experiences of unquestioned loyalty to “The Party” while also maintaining a tongue-in-cheek, critical distance from what she now recognizes as a tyrannical regime.
— Kirkus

A uniquely engaging and illuminating account of a young life during a period of intense turmoil... Free offers gem after gem of the bizarre reality that Hoxhaism produced.....Detailing the absurdities of Hoxha’s regime from a child’s perspective, Ypi pulls off the remarkable feat of emphasizing their cruelty with a light and often humorous touch... Free concludes with important lessons about sustaining the ability to ‘reflect, apologize and learn,’ given that ‘people never make history under circumstances they choose.’

Precious little was known about life in communist Albania under Enver Hoxha. That strange world and its legacy is now stunningly brought to life in Lea Ypi’s Free. From protective doublespeak round the kitchen table to the uncertain, and unfulfilled promises of post-communism, Ypi offers a moving and compelling memoir of growing up in turbulent times, as well as a frank questioning of what it really means to be 'free.'

Free is much more than a historical account of a country we know or care little about, except as a punchline for jokes about poverty and atavism. Just as Ypi and her family watched empires crumble, taking whole realities with them, we too are living in catastrophic times, with the geopolitical certainties that have sheltered us for the past century, for better or worse – the US, UK and more recently, the EU – all in various stages of collapse or decay. This, Ypi warns us, is how it will feel when the levee breaks.

Lea Ypi's Free is the first book since Elena Ferrante's My Brilliant Friend that I have pressed on family, friends and colleagues, insisting they read it. . . a truly riveting memoir and a profound meditation on what it means to be free.

Ypi's deliciously smart memoir of her Albanian girlhood at the end of the Cold War is a brilliant disquisition on the meanings of freedom - its lures, false hopes, disappointments and possibilities - in our time.
— Lyndsey Stonebridge - New Statesman

An astonishing and deeply resonant memoir about growing up in the last days of the last Stalinist outpost of the 20th century. . . What makes it so unforgettable is that we see this world, one about which we know so little, through the eyes of a child... It is more fundamentally about humanity, and about the confusions and wonders of childhood. Ypi weaves magic in this book: I was entranced from beginning to end.
— Laura Hackett - Sunday Times

Riveting. . .A wonderfully funny and poignant portrait of a small nation in a state of collapse. . . gloriously readable. . .One of the nonfiction titles of the year, it is destined for literary accolades and popular success
— Luke Harding - Observer