Ravenous: Otto Warburg, the Nazis, and the Search for the Cancer-Diet Connection (Paperback) 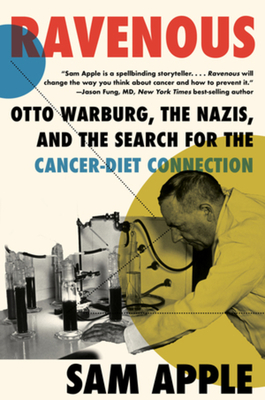 The extraordinary story of the Nazi-era scientific genius who discovered how cancer cells eat—and what it means for how we should.

The Nobel laureate Otto Warburg—a cousin of the famous finance Warburgs—was widely regarded in his day as one of the most important biochemists of the twentieth century, a man whose research was integral to humanity’s understanding of cancer. He was also among the most despised figures in Nazi Germany. As a Jewish homosexual living openly with his male partner, Warburg represented all that the Third Reich abhorred. Yet Hitler and his top advisors dreaded cancer, and protected Warburg in the hope that he could cure it.

In Ravenous, Sam Apple reclaims Otto Warburg as a forgotten, morally compromised genius who pursued cancer single-mindedly even as Europe disintegrated around him. While the vast majority of Jewish scientists fled Germany in the anxious years leading up to World War II, Warburg remained in Berlin, working under the watchful eye of the dictatorship. With the Nazis goose-stepping their way across Europe, systematically rounding up and murdering millions of Jews, Warburg awoke each morning in an elegant, antiques-filled home and rode horses with his partner, Jacob Heiss, before delving into his research at the Kaiser Wilhelm Society.

Hitler and other Nazi leaders, Apple shows, were deeply troubled by skyrocketing cancer rates across the Western world, viewing cancer as an existential threat akin to Judaism or homosexuality. Ironically, they viewed Warburg as Germany’s best chance of survival. Setting Warburg’s work against an absorbing history of cancer science, Apple follows him as he arrives at his central belief that cancer is a problem of metabolism. Though Warburg’s metabolic approach to cancer was considered groundbreaking, his work was soon eclipsed in the early postwar era, after the discovery of the structure of DNA set off a search for the genetic origins of cancer.

Remarkably, Warburg’s theory has undergone a resurgence in our own time, as scientists have begun to investigate the dangers of sugar and the link between obesity and cancer, finding that the way we eat can influence how cancer cells take up nutrients and grow. Rooting his revelations in extensive archival research as well as dozens of interviews with today’s leading cancer authorities, Apple demonstrates how Warburg’s midcentury work may well hold the secret to why cancer became so common in the modern world and how we can reverse the trend. A tale of scientific discovery, personal peril, and the race to end a disastrous disease, Ravenous would be the stuff of the most inventive fiction were it not, in fact, true.

Sam Apple has written for the New York Times Magazine, Wired, the Atlantic, and NewYorker.com. He is on the faculty of the MA in Science Writing and MA in Writing programs at Johns Hopkins.

Eye-opening... filled with... outrageous and entertaining stories... I walked away from Ravenous thinking of Otto Warburg as a sort of Sigmund Freud of cancer research.

Ravenous tells the story of an extraordinary life, and of the visionary work that sustained it.... [An] exceptionally interesting and well-written book.
— Thomas Morris - Times Literary Supplement

The research that Warburg is best known for today, and the work that forms the backbone of Ravenous, is his discovery that cancer cells behave differently from healthy cells in two very specific ways: They consume massive amounts of glucose — Apple compares them to ravenous shipwrecked sailors — and they eschew aerobic respiration in favor of fermentation. . . Apple covers everything from Hitler’s obsessive preoccupation with cancer to how the German Empire’s transformation into an industrial powerhouse led to a Romanticism-fueled movement that emphasized both environmental and racial purity. The fact that Apple can make these stories . . . feel so immediate is a testament to his canny knack for choosing apposite details.

[Apple] weaves together this complex narrative in a way that makes arcane science accessible and fascinating. The book is also thought-provoking for anyone interested in avoiding cancer — and who isn’t?
— Marie McCullough - Philadelphia Inquirer

[A] fascinating new book about the link between diet and cancer... [Ravenous] has received positive reviews from both cancer researchers and general readers interested in how the way we eat in Western societies (specifically the inordinate amounts of sugar we consume) makes us vulnerable to cancer.

— Renee Ghert-Zand - The Times of Israel

Rav­en­ous is a page-turn­er, and much of its suc­cess is due to Apple’s flu­id, approach­able writ­ing.... A joy to read and an utter­ly fas­ci­nat­ing tale.

[A] spellbinding new work of reporting by science journalist Sam Apple. Rarely has such an array of medical troubles, historical events, bench science and political intrigue come together as they do in Ravenous.

[A] revolutionary contribution... Ravenous succeeds at every level – it is storytelling at its very best.

[Ravenous] offers us interesting history, both about the Nazis and scientific research into the causes of cancer. Reading it will certainly make us think about what we eat.

Apple . . . delivers a gripping account of biochemist Otto Warburg (1883–1970) and the origins of modern cancer science in his excellent latest. . . As he draws fascinating insights from the interplay between science and ideology. . . Apple keeps the scientific explanations easy to understand, while interviews with a slew of characters add color. This is a bona fide page-turner.
— Publishers Weekly, starred review

[Apple] skillfully blends science writing with biography to present the story of this quirky, arrogant, and brilliant scientist, who revolutionized research on cancer and photosynthesis (how organisms use energy to make glucose).... An illuminating account that makes Warburg (the man and the scientist) accessible to general readers.
— Karl Helicher, Library Journal

A long-overdue biography of German biologist Otto Warburg (1883-1970), who won the Nobel Prize for his work on cell respiration and metabolism, especially as related to cancer.... A welcome addition to the library on the disease and one of its most successful enemies.
— Kirkus Reviews