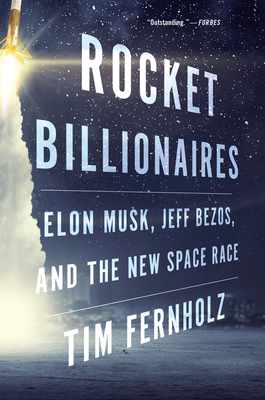 Featured on NPR and PBS’s SciTech Now, and in Fast Company, Forbes, and the Wall Street Journal

The inside story of the new race to conquer space

For the outsize personalities staking their fortunes on spaceships, the new race to explore space could be a dead end, a lucrative opportunity—or the key to humanity’s survival.
Elon Musk and Jeff Bezos take center stage in this fast‑paced narrative as they attempt to disrupt the space economy and feed their own egos. We meet a supporting cast of equally fascinating entrepreneurs, from the irrepressible British mogul Richard Branson to the satellite internet visionary Greg Wyler.
Tim Fernholz’s fly‑on‑the‑wall reporting captures an industry in the midst of disruption. NASA seeks to preserve its ambitious space program, traditional aerospace firms like Boeing and Lockheed Martin scramble to adapt to new competitors, lobbyists tussle over public funds, and lawmakers try to prevent this new space race from sparking global conflict. Fernholz spins this high‑stakes marathon into a riveting tale of rivalry and survival.

TIM FERNHOLZ is a reporter at Quartz, the award-winning global news site from the Atlantic Media Company. He has been reporting on SpaceX since 2011, as well as covering the global economy at large. He has been a Knight Journalism Fellow and a fellow at the New America Foundation in Washington, D.C., and was a co-host of Actuality, a podcast about the new global economy co-produced by Quartz and Marketplace.

Featured on NPR and PBS's SciTech Now, as well as in Fast Company, Forbes, and Inverse.

“. . . fascinating biographical details about today’s space entrepreneurs . . . [Fernholz] does a good job of explaining the risks involved in the rocket industry.”—The Weekly Standard

“Pass[es] along shiny nuggets about the origins and evolution of the billionaires’ space dreams.”—GeekWire

“This book is exemplary journalistic work. Fernholz relates the story of these two self-made companies to the public in a non-biased way. It is evident on every page how passionate Fernholz is about this project and it really shows, yet he maintains an academic, non-intrusive journalistic voice. The narrative flows smoothly and is by no means elitist or exclusive.”—Infinite Text