My Name Is Wakawakaloch! (Hardcover) 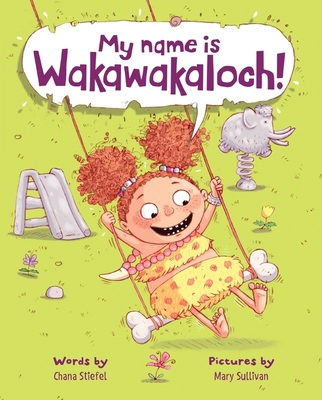 By Chana Stiefel, Mary Sullivan (Illustrator)
$17.99
On Our Shelves Now

In this lighthearted picture book, the intrepid, determined, and savvy Wakawakaloch learns to embrace what makes her special while lifting up her neanderthal community. Perfect for fans of Vera Brosgol and Emily Hughes.

No one can pronounce Wakawakaloch’s name. Why couldn’t she be called something simple . . . like Gloop? That’s a name you can find on a T-shirt! But after a visit with her tribe’s elder, Wakawakaloch discovers what her name means, and how powerful names can be. Gloop may be easy to say, but the girl who helps her friends embrace differences and wear their names proudly? Her name is Wakawakaloch!

Chana Stiefel majored in English and Art History. During journalism school at New York University (where she earned an M.A. in Science & Environmental Reporting), she started writing for kids. Chana had an internship at Scholastic Inc., working on SuperScience Magazine. Later, she became an editor at Scholastic’s Science World, a magazine geared toward making science news fun and exciting for kids. She’s been freelancing for the past 14 years.

Mary Sullivan spent a great deal of time drawing in her formative years. Though she received a BFA from the University of Texas at Austin, she considers herself a self-trained illustrator. Ms. Sullivan has shown her work at galleries and coffees shops in Dallas and Austin. She channels her considerable creative energy  into projects for Highlights for Children, Scholastic, Innovative Kids, School Zone, Oxford Press U.K., Pearson and many more. Her first picture book for HMH, Ball, was a 2014 Geisel Honor Book. She lives in Cedar Park, Texas.
www.marysullivan.com
Twitter: @sullivandraws
Instagram: @sullivandraws

"Wakawakaloch's frustrations surrounding the mispronunciation of her name will resonate with many....This bombastic main character allows the story to shine." —Kirkus

"Energetic, colorful cartoon illustrations depict peppy, bushy-pigtailed Wakawakaloch in a Flintstones’-like prehistoric setting with witty, often anachronistic details....The approach to subject will likely amuse while also encouraging respect and appreciation for the uniqueness of all names—and their proper pronunciations."—Booklist