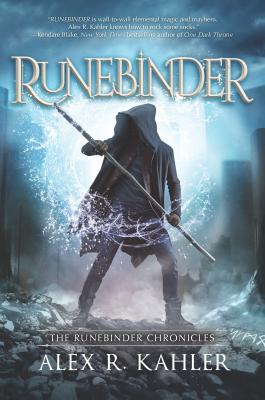 This is book number 1 in the Runebinder Chronicles series.

"Runebinder is wall-to-wall elemental magic and mayhem. Alex R. Kahler knows how to rock some socks." --Kendare Blake, New York Times bestselling author of Three Dark Crowns "If The Walking Dead and Constantine had a baby and that baby was unabashedly queer as hell, it would be Runebinder. " --Tristina Wright, author of 27 Hours "A roller coaster ride through a world of chaos and blood." --Carrie Ryan, New York Times bestselling author The Forests of Hands and Teeth series and Daughter of Deep Silence Magic is risen. When magic returned to the world, it could have saved humanity, but greed and thirst for power caused mankind's downfall instead. Now once-human monsters called Howls prowl abandoned streets, their hunger guided by corrupt necromancers and the all-powerful Kin. Only Hunters have the power to fight back in the unending war, using the same magic that ended civilization in the first place. But they are losing. Tenn is a Hunter, resigned to fight even though hope is nearly lost. When he is singled out by a seductive Kin named Tom+s and the enigmatic Hunter Jarrett, Tenn realizes he's become a pawn in a bigger game. One that could turn the tides of war. But if his mutinous magic and wayward heart get in the way, his power might not be used in favor of mankind. If Tenn fails to play his part, it could cost him his friends, his life...and the entire world. Books in the Runebinder Chronicles:
Runebinder
Runebreaker
Runemaker