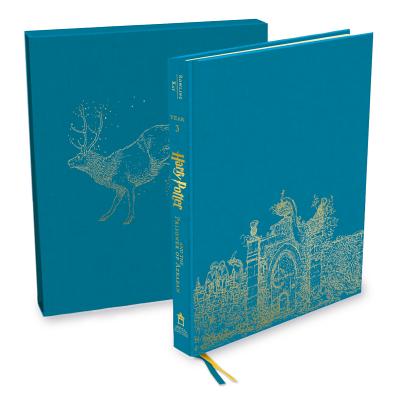 This is book number 3 in the Harry Potter series.

J.K. Rowling is the author of the seven Harry Potter books, which have sold over 500 million copies, been translated into over 80 languages, and made into eight blockbuster films. She also wrote three short series companion volumes for charity, including Fantastic Beasts and Where to Find Them, which later became the inspiration for a new series of films. Harry’s story as a grown-up was later continued in a stage play, Harry Potter and the Cursed Child, which J.K. Rowling wrote with playwright Jack Thorne and director John Tiffany.

In 2020, she returned to publishing for younger children with the fairy tale The Ickabog, which she initially published for free online for children in lockdown, later donating all her book royalties to help vulnerable groups affected by the Covid-19 pandemic.

J.K. Rowling has received many awards and honors for her writing, including for her detective series written under the name Robert Galbraith. She supports a wide number of humanitarian causes through her charitable trust Volant, and is the founder of the children’s care reform charity Lumos.

For as long as she can remember, J.K. Rowling wanted to be a writer, and is at her happiest in a room, making things up. She lives in Scotland with her family.

Jim Kay won the Kate Greenaway Medal in 2012 for his illustrations in A Monster Calls by Patrick Ness. Jim studied illustration at the University of Westminster and since graduating has worked in the archives of Tate Britain and the Royal Botanic Gardens at Kew. Jim has produced concept work for television and contributed to a group exhibition at the Victoria and Albert Museum in London. He now lives and works in Northamptonshire, England, with his wife.

Praise for Jim Kay's illustrations:"I love seeing Jim Kay's interpretation of Harry Potter's world, and I feel honored and grateful that he continues to lend his talent to it." -- J.K. Rowling"It's all that an old-fashioned book aficionado could wish for . . . Is this, one wonders, the sort of book found at Diagon Alley's Flourish and Blotts or in the Hogwarts library? Kay's illustrations, freshly re-envisioning the story, range from spot images to dramatic double page spreads, all pulsating with color and vitality. This gorgeous volume is sure to please all, from Harry Potter neophytes to longtime fans." -- New York Times Book Review