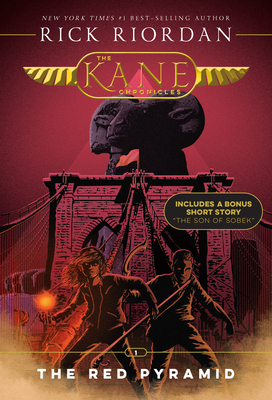 This is book number 1 in the Kane Chronicles, The series.

"Since the death of their mother six years ago, Carter and Sadie Kane have led very different lives, only seeing each other twice a year.  Despite their differences, however, the two siblings must work together to fight gods and monsters straight out of Egyptian mythology.  The fate of their father- and the entire North American continent- depend on it."

The bestselling author of Percy Jackson and the Olympians takes on ancient Egypt in the first book of a trilogy that offers a modern-day portal into a rich fantastical world of ancient myth, now in paperback.

“Fans of the Riordan magic--equal parts danger, myth, and irreverence--will embrace this new series with open arms.”—The Horn BookSince their mother’s death, Carter and Sadie have become near strangers. While Sadie has lived with her grandparents in London, her brother has traveled the world with their father, the brilliant Egyptologist, Dr. Julius Kane.

One night, Dr. Kane brings the siblings together for a “research experiment” at the British Museum, where he hopes to set things right for his family. Instead, he unleashes the Egyptian god Set, who banishes him to oblivion and forces the children to flee for their lives.

Soon, Sadie and Carter discover that the gods of Egypt are waking, and the worst of them--Set–has his sights on the Kanes. To stop him, the siblings embark on a dangerous journey across the globe -- a quest that brings them ever closer to the truth about their family, and their links to a secret order that has existed since the time of the pharaohs.

Rick Riordan, dubbed "storyteller of the gods" by Publishers Weekly, is the author of five #1 New York Times best-selling middle grade series with millions of copies sold throughout the world: Percy Jackson and the Olympians, The Heroes of Olympus, and the Trials of Apollo, based on Greek and Roman mythology; the Kane Chronicles, based on Ancient Egyptian mythology; and Magnus Chase and the Gods of Asgard, based on Norse mythology. Rick collaborated with illustrator John Rocco on two #1 New York Times best-selling collections of Greek myths for the whole family: Percy Jackson's Greek Gods and Percy Jackson's Greek Heroes. Rick is also the publisher of an imprint at Disney-Hyperion, Rick Riordan Presents, dedicated to finding other authors of highly entertaining fiction based on world cultures and mythologies. He lives in Boston, Massachusetts with his wife and two sons. Follow him on Twitter at @RickRiordan.