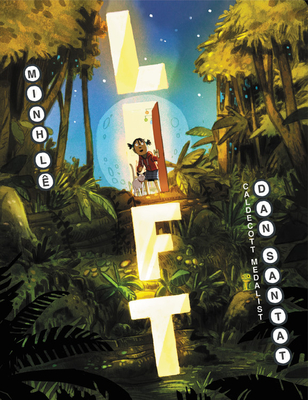 From the award-winning and bestselling creators of Drawn Together comes the fantastic tale of a magical elevator that will lift your spirits--and press all the right buttons!
Iris loves to push the elevator buttons in her apartment building, but when it's time to share the fun with a new member of the family, she's pretty put out. That is, until the sudden appearance of a mysterious new button opens up entire realms of possibility, places where she can escape and explore on her own. But when she's forced to choose between going at it alone or letting her little brother tag along, Iris finds that sharing a discovery with the people you love can be the most wonderful experience of all.
Using their dynamic comics-inspired storytelling, acclaimed author Minh Lê and Caldecott Medal-winning artist Dan Santat carry readers on a journey of ups, downs, and twists and turns that will send hearts--and imaginations--soaring.
*"Beautiful"
---School Library Journal, starred review
*"Dazzling"
---Publishers Weekly, starred review
*"Delightful"
---School Library Connection, starred review
*"Immersive"
---Booklist, starred review
*"Inspired"
---Kirkus Reviews, starred review

Minh Lê is an author and national early childhood policy expert. He wrote Drawn Together (also illustrated by Dan Santat), Let Me Finish! (illustrated by Isabel Roxas), and The Perfect Seat (illustrated by Gus Gordon). He has also written for the New York Times, the Horn Book, and the Huffington Post. Minh currently lives in San Diego, California with his wife and kids. He can be found online at minhlebooks.com.
Dan Santat is the author and artist of the Caldecott Award-winning The Adventures of Beekle: The Unimaginary Friend, as well as the New York Times bestsellers Are We There Yet? and After the Fall. He has also illustrated many titles including Drawn Together (also by Minh Lê), The Alphabet's Alphabet (by Chris Harris), No More Poems (by Rhett Miller), and the Crankenstein series (by Samantha Berger). Dan lives in Southern California with his wife, two kids, and two dogs. He can be found online at dantat.com.

"This second collaboration by the award-winning team of Lê and Santat touches that sweet spot between children's 'anywhere but here' longings and the everyday joys and heartaches of sibling rivalry."—The New York Times

* "Styled like a graphic novel's, the illustrations focus on Iris' feelings as she imagines a new elevator button, one that she can control, with the magical ability to transport her to other worlds. Frustration, invention, escape, wonder -- all move across the pages with immediacy. Like Sendak's Max, Iris uses anger to lift her away from the real world into jungles and outer space. And she returns to her room changed. Breaking the bounds of a traditional picture book, Iris' creative growth elevates us all."—Kirkus Reviews, starred review

* "The story is beautifully told through Santat's expressive characters and dynamic panels of sequential art..... [It's] an entirely immersive experience that children will reach for, again and again, like their own magic button."—Booklist, starred review

* "An excellent choice for individual consumption or as a read-aloud, this story is sure to get creative juices flowing."—School Library Connection, starred review

* "Santat's comedic versatility and theatrical use of light give the story cinematic momentum, while Lê's insight into Iris's conflicting emotions adds depth and warmth to the tale."—Publishers Weekly, starred review

"A magic elevator button brings two siblings together in this uplifting picture book reminiscent of a graphic novel."—Shelf Awareness

"Magic happens here, through a few words and vibrant illustrations that capture emotions common to kids finding their place in a family and a community."—Common Sense Media

"The story itself makes a kid-appealing metaphor about leaving the familiarities of baby and toddlerhood behind for new, exciting adventures."
—BCCB