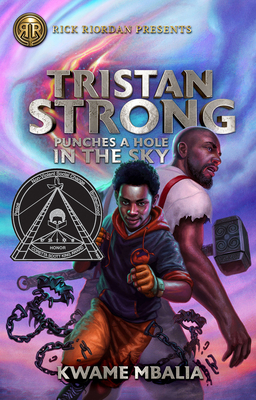 This is book number 1 in the Tristan Strong series.

"One of the things we all know about books is that stories have incredible power. This lesson is something that is at the core of Kwame Mbalia's Tristan Strong Punches a Hole in the Sky and a lesson that Tristan struggles to learn during the course of his adventures through African legend and African American folklore. John Henry and Brer Rabbit rub shoulders with Anansi in a book that tells a story of loss, friendship and finding yourself."

*"Mbalia expertly weaves a meaningful portrayal of family and community with folklore, myth, and history—including the legacy of the slave trade—creating a fast-paced, heroic series starter."--Publishers Weekly (starred review)

Seventh grader Tristan Strong feels anything but strong ever since he failed to save his best friend when they were in a bus accident together. All he has left of Eddie is the journal his friend wrote stories in. Tristan is dreading the month he's going to spend on his grandparents' farm in Alabama, where he's being sent to heal from the tragedy.

But on his first night there, a sticky creature shows up in his bedroom and steals Eddie's notebook. Tristan chases after it--is that a doll?--and a tug-of-war ensues between them underneath a Bottle Tree. In a last attempt to wrestle the journal out of the creature's hands, Tristan punches the tree, accidentally ripping open a chasm into the MidPass, a volatile place with a burning sea, haunted bone ships, and iron monsters that are hunting the inhabitants of this world.

Tristan finds himself in the middle of a battle that has left Black American folk heroes John Henry and Brer Rabbit exhausted. In order to get back home, Tristan and these new allies will need to entice the god Anansi, the Weaver, to come out of hiding and seal the hole in the sky. But bartering with the trickster Anansi always comes at a price. Can Tristan save this world before he loses more of the things he loves?

Endorsed by Rick Riordan, author of Percy Jackson and the Olympians, soon to be a series on Disney+.

Kwame Mbalia is the New York Times best-selling author of Tristan Strong Punches a Hole in the Sky, for which he received a Coretta Scott King Author Honor award.The book was also named to best-of-the-year listscompiled by Publishers Weekly, the Chicago Public Library, and the New York Times.The second book in the trilogy is Tristan Strong Destroys the World, and the third is Tristan Strong Keeps Punching. Kwame is also the publisher of an imprint at Disney Hyperion called Freedom Fire, devoted to publishing middle grade fiction by Black creators about the African diaspora. Kwame lives with his wife and children in Raleigh, North Carolina, where he is currently working on the new middle grade fantasy series. Follow him on Twitter @KSekouM.

Mbalia expertly weaves a meaningful portrayal of family and community with folklore, myth, and history—including the legacy of the slave trade—creating a fast-paced, heroic series starter.—Publishers Weekly

Mbalia's African American and West African gods (with villains tied to U.S. chattel slavery and the Middle Passage specifically) touch on the tensions between the cultures, a cultural nuance oft overlooked. Readers who want more than just a taste of Alke will be eager for future books.—Kirkus

Mbalia’s epic debut centers African American characters and tradition, featuring a pantheon of legends and a plot worthy of such tricksters as Brer Rabbit and Anansi the Weaver. Perfectly paced, this cinematic adventure never drags, anchored by Tristan’s conversational narration and balanced by his struggle to cope with a friend’s passing. It brims with heart, humor, and action, successfully crafting a beautifully unified secondary world that brings the power of stories to glorious life.—Booklist

Overall a stellar mix of the playful and the serious, the traditional and the original, this novel marks the emergence of a strong new voice in myth-based children’s fantasy.—BCCB

Part of the “Rick Riordan Presents” series, this debut novel offers a richly realized world, a conversational, breezy style, and a satisfying conclusion that leaves room for sequels.—SLJ

This epic tale is worthy of the endorsement of Rick Riordan, who wrote the preface in this novel. A guaranteed edge-of-your-seat read aloud for upper elementary and middle school fans of tall tales, mythology, and folkloric literary adventures.—SLC