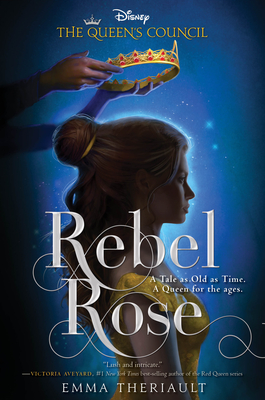 Now with a gorgeous new series look! In this sweeping YA fantasy series, Disney’s Princesses grow up—and learn to rule—guided by the magical Queen’s Council. In Rebel Rose, Belle faces a royal future in a time of turmoil.

Not so long ago, Belle dreamed of leaving her provincial home for a life of adventure. Now she finds herself living in a lush palace, torn between her past as a commoner and her future as royalty. While Belle grapples with her newfound position, there are those who would do anything to keep her from power.

This lush and empowering reimagining of Princess Belle blends fairy-tale lore and “the French Revolution with a Disney twist” (SLJ).

Emma Theriault was born and raised in Ottawa, Canada, and thus has a penchant for gothic revival architecture and a constant craving for Beavertails. She has been everything from an enthusiastic bookseller (who once sold a book to Prime Minister Trudeau) to a purveyor of whitewater rafting adventures in the Interior of British Columbia. When not writing books about curses and blood magic, she can be found eating burritos, hiking with her boyfriend or cuddling with her cats, Gatsby and Harriet. You can follow her on Twitter @eltheriault.

Fairy-tale fans will enjoy the care and depth given to Belle’s character and the touches of magic...A promising start to a new series of fairy-tale continuations grounded in historical events.——Kirkus

Theriault’s writing is perfectly paced and the cast of characters developed with historical realism; fans of the movies will be satisfied by this evolution of a favorite Disney princess...The personal and national stakes of this novel root it in history but also within its backstory as a Disney classic...The French Revolution with a Disney twist, Theriault’s debut is rich in historical detail while answering the long-asked question, “What happens after happily ever after?——SLJ