The Rancher Takes a Wife: A True Account of Life on the Last Great Cattle Frontier (Mass Market) 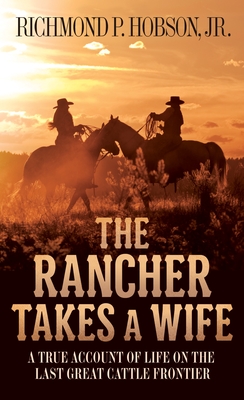 Continue on the adventure with The Rancher Takes a Wife, the conclusion to Richmond Hobson's western frontier trilogy!
The interior of British Columbia in the early 20th century is a jungle of swamps, rivers, and grasslands. It's a vast and still barely explored wilderness, whose principal citizens are timber wolves, moose, giant grizzly bears, and the odd human being.
Into this forbidding land, Rich Hobson, Pioneer cattle rancher, brings Gloria, his city-raised bride. Her adjustment to life in the wilderness is sure to be difficult, as is her relationship with Rich and his backwoods cronies. Will Gloria find that she belongs in this strange, harsh land?
Told with wit and wisdom, Hobson recounts a wild true adventure story in the last book of his collection of survival tales. These dramatic tales are described with the humor and vivid detail that have made Hobson's books perennial favorites.

Richmond P. Hobson Jr. (1907-1966) was born in Washington, DC, where he worked with pack outfits, survey crews, and construction gangs, saving, all the while, to buy a cattle ranch. He came to Canada after the stock market crash of the late 1920s. He and his business partner, Panhandle "Pan" Phillips, moved to the interior of British Columbia and established the Frontier Cattle Company in the 1930s. He later married his wife, Gloria, moved to Vanderhoof, British Columbia, and continued ranching while writing about his experiences. Other books by Hobson are Nothing Too Good for a Cowboy and The Rancher Takes a Wife.