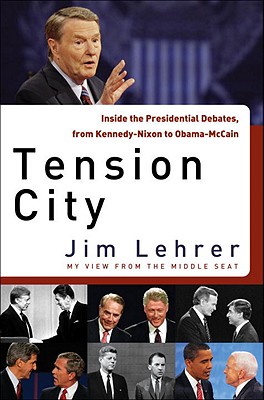 “In his quiet but intense way, Jim Lehrer earns the trust of the major political players of our time,” notes Barbara Walters. “He explains and exposes their hopes and dreams, their strengths and failures as they try to put their best foot forward.”

From the man widely hailed as “the Dean of Moderators” comes a lively and revealing book that pulls back the curtain on more than forty years of televised political debate in America. A veteran newsman who has presided over eleven presidential and vice-presidential debates, Jim Lehrer gives readers a ringside seat for some of the epic political battles of our time, shedding light on all of the critical turning points and rhetorical faux pas that helped determine the outcome of America’s presidential elections—and with them the course of history. Drawing on his own experiences as “the man in the middle seat,” in-depth interviews with the candidates and his fellow moderators, and transcripts of key exchanges, Lehrer isolates and illuminates what he calls the “Major Moments” and “killer questions” that defined the debates, from Kennedy-Nixon to Obama-McCain.

Oftentimes these moments involve the candidates themselves and are seared into our collective political memory. Michael Dukakis stumbles badly over a question about the death penalty. Dan Quayle compares himself to John F. Kennedy once too often. Barack Obama and John McCain barely make eye contact over the course of a ninety-minute discussion. At other times, the debate moderators themselves become part of the story—and Lehrer is there to give us a backstage look at the drama. Peter Jennings suggests surprising the candidates by suspending the carefully negotiated rules minutes before the 1988 presidential debate—to the consternation of his fellow panelists. Lehrer himself weathers a firestorm of criticism over his performance as moderator of the 2000 Bush-Gore debate. And then there are the excruciating moments when audio lines go dead and TelePrompTers stay dark just seconds before going on the air live in front of a worldwide television audience of millions.

Asked to sum up his experience as a participant in high-level televised debates, President George H. W. Bush memorably likened them to an evening in “tension city.” In Jim Lehrer’s absorbing insider account, we find out that truer words were never spoken.

Jim Lehrer is the author of twenty novels, two memoirs, and three plays, and for years was the executive editor and anchor of "The NewsHour on PBS." He lives in Washington, D.C., with his novelist wife, Kate. They have three daughters.

“Unique and compelling . . . Jim Lehrer at once enlightens and entertains, deepening our understanding of the modern presidency while telling a splendid story. Tension City is engaging history from a fair-minded and insightful author who has himself become part of the nation’s fabric.”—Jon Meacham, Pulitzer Prize–winning author of American Lion

“Recreated with a wit and perspective that only a natural born storyteller can summon . . . Some of the most interesting presidential debates take place off-camera, around the reporters asking the questions . . . remember Bernie Shaw’s jaw-dropping inquiry directed to Michael Dukakis about the hypothetical rape and murder of the candidate’s wife? That’s just one of the revelations that makes this the ultimate insider’s account of what George H. W. Bush dubbed ‘tension city.’ It’s all here—Gerald Ford’s premature liberation of Poland; Ronald Reagan’s way with one-liners; the well-honed empathy of Bill Clinton; and the multiple personalities of Al Gore.”—Richard Norton Smith, author of The Colonel

“Jim Lehrer is a national monument, and this riveting book shows how he became America’s moderator. Tension City is at once Lehrer’s behind-the-blue-curtain account of his central role in almost a dozen presidential debates and an original, brisk inner history of recent American politics, combined with important lessons on how to moderate anything—all told in Lehrer’s famously wry and authoritative voice. Each page of Lehrer’s book benefits from his unparalleled experience as a key player, and his extraordinary ability to view these fabled confrontations with the detachment, insight, humor, and ironic sense of a wonderful writer.”—Michael Beschloss, New York Times bestselling author of Presidential Courage