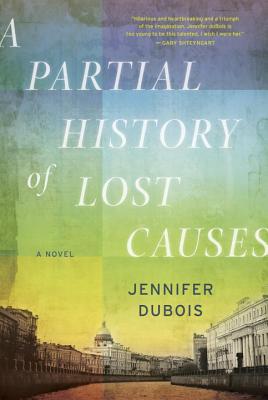 FINALIST FOR THE PEN/HEMINGWAY PRIZE FOR DEBUT FICTION

In Jennifer duBois’s mesmerizing and exquisitely rendered debut novel, a long-lost letter links two disparate characters, each searching for meaning against seemingly insurmountable odds. With uncommon perception and wit, duBois explores the power of memory, the depths of human courage, and the endurance of love.

“Astonishingly beautiful and brainy . . . [a] stunning novel.”—O: The Oprah Magazine

In St. Petersburg, Russia, world chess champion Aleksandr Bezetov begins a quixotic quest: He launches a dissident presidential campaign against Vladimir Putin. He knows he will not win—and that he is risking his life in the process—but a deeper conviction propels him forward.

In Cambridge, Massachusetts, thirty-year-old English lecturer Irina Ellison struggles for a sense of purpose. Irina is certain she has inherited Huntington’s disease—the same cruel illness that ended her father’s life. When Irina finds an old, photocopied letter her father wrote to the young Aleksandr Bezetov, she makes a fateful decision. Her father asked the chess prodigy a profound question—How does one proceed in a lost cause?—but never received an adequate reply. Leaving everything behind, Irina travels to Russia to find Bezetov and get an answer for her father, and for herself.

Praise for A Partial History of Lost Causes

“DuBois is precise and unsentimental. . . . She moves with a magician’s control between points of view, continents, histories, and sympathies.”—The New Yorker

“Terrific . . . In urgent fashion, duBois deftly evokes Russia’s political and social metamorphosis over the past thirty years through the prism of this particular and moving relationship.”—Publishers Weekly (starred review)

“Hilarious and heartbreaking and a triumph of the imagination.”—Gary Shteyngart

Jennifer duBois is a recent graduate of the Iowa Writers' Workshop and is currently completing a Wallace Stegner Fellowship at Stanford University. Originally from western Massachusetts, she lives in Northern California.

“[An] astonishingly beautiful and brainy debut novel . . . Against the backdrop of Russia’s recent political past, duBois conjures the briefly intersecting lives of two intriguingly complex strangers—prickly, introspective, and achingly lonely—who are nevertheless kindred spirits.  Her prose is both apt and strikingly original . . . So how do we proceed when defeat is inevitable? The stunning novel suggests an answer: We just do. Perseverance, it seems, is its own kind of victory.” —O: The Oprah Magazine

"Gorgeous . . . DuBois writes with haunting richness and fierce intelligence. She has an equal grasp of politics and history, the emotional nuances of her complex characters, and the intricacies of chess. Irina and Aleksandr are difficult people, prickly and formidable, but they’re also sympathetic and flawed, vulnerable and human. DuBois’ evocations of Russia are lush, and her swashbuckling descriptions, whether of chess games, a doomed political campaign, or the anticipation of death, are moving yet startlingly funny—full of bravado, insight, and clarity. A Partial History of Lost Causes is a thrilling debut by a young writer who evidently shares the uncanny brilliance of her protagonists.” —Kate Christensen, Elle

"Jennifer duBois's first novel is a meticulously constructed tale of intertwining destinies. Irina, a young American facing an unbearable diagnosis, and Aleksandr, a former Soviet chess champion turned dissident politician, are brought together by a long-forgotten letter that asks how to carry on with a lost cause. Ranging from Massachusetts to Moscow and covering several decades, A Partial History of Lost Causes abounds and fascinates with dark wit and poignant insight, chess and politics, frozen rivers and neon nightclubs.” —Maggie Shipstead, Salon

“Hilarious and heartbreaking and a triumph of the imagination. Jennifer duBois is too young to be this talented.  I wish I were her.”—Gary Shteyngart

“An amazing achievement—a braiding of historical, political, and personal, each strand illuminating the other. Wonderful characters, elusive glimpses of wisdom, and a gripping story that accelerates to just the right ending.”—Arthur Phillips

“Thrilling, thoughtful, strange, gorgeous, political, and deeply personal, Jennifer duBois’s A Partial History of Lost Causes is a terrific debut novel. In prose both brainy and beautiful, she follows her characters as they struggle to save each other. This is a book to get lost in.”—Elizabeth McCracken

“By what exquisite strategy did duBois settle on this championship permutation of literary moves? Her debut is a chess mystery with political, historical, philosophical, and emotional heft, a paean to the game and the humans who play it. DuBois probes questions of identity, death, art, and love with a piercing intelligence and a questing heart.”—Heidi Julavits

“Terrific . . . In urgent fashion, duBois deftly evokes Russia’s political and social metamorphosis over the past thirty years through the prism of this particular and moving relationship.”—Publishers Weekly (starred review)