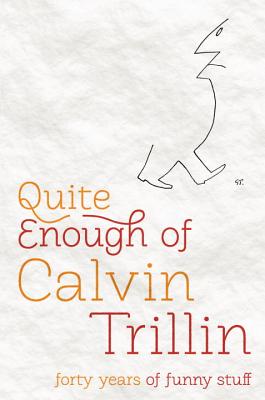 For at least forty years, Calvin Trillin has committed blatant acts of funniness all over the place—in The New Yorker, in one-man off-Broadway shows, in his “deadline poetry” for The Nation, in comic novels like Tepper Isn’t Going Out, in books chronicling his adventures as a happy eater, and in the column USA Today called “simply the funniest regular column in journalism.”

Now Trillin selects the best of his funny stuff and organizes it into topics like high finance (“My long-term investment strategy has been criticized as being entirely too dependent on Publishers Clearing House Sweepstakes”) and the literary life (“The average shelf life of a book is somewhere between milk and yogurt.”)

In Quite Enough of Calvin Trillin, the author deals with such subjects as the horrors of witnessing a voodoo economics ceremony and the mystery of how his mother managed for thirty years to feed her family nothing but leftovers (“We have a team of anthropologists in there now looking for the original meal”) and the true story behind the Shoe Bomber: “The one terrorist in England with a sense of humor, a man known as Khalid the Droll, had said to the cell, ‘I bet I can get them all to take off their shoes in airports.’ ” He remembers Sarah Palin with a poem called “On a Clear Day, I See Vladivostok” and John Edwards with one called “Yes, I Know He’s a Mill Worker’s Son, but There’s Hollywood in That Hair.”

In this, the definitive collection of his humor, Calvin Trillin is prescient, insightful, and invariably hilarious.

A longtime staff writer at "The New Yorker, "Calvin Trillin is also "The Nation"'s deadline poet. His bestsellers range from the memoir "About Alice" to "Obliviously On He Sails: The Bush Administration in Rhyme." He lives in Greenwich Village, which he describes as "a neighborhood where people from the suburbs come on weekends to test their car alarms."

“I spent my college years deep into the great humorists: Benchley, Perelman, Woody Allen. Calvin Trillin is up there with any of them.”—David Brooks, The Daily Beast

“Trillin may be the funniest columnist in America—bemused, amused, wry and right on the mark.”—People