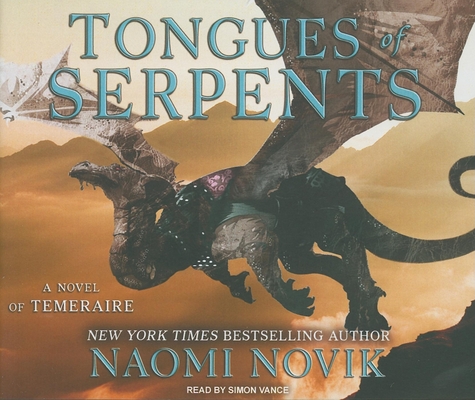 By Naomi Novik, Simon Vance (Narrated by)
Unavailable. Orders will be auto-cancelled.

This is book number 6 in the Temeraire series.

A dazzling blend of military history, high-flying fantasy, and edge-of-your-seat adventure, Naomi Novik's Temeraire novels, set in an alternate Napoleonic era in which intelligent dragons have been harnessed as weapons of war, are more than just perennial bestsellers-they are a worldwide phenomenon. Now, in Tongues of Serpents, Naomi Novik is back, along with the dragon Temeraire and his rider and friend, Captain Will Laurence. Convicted of treason despite their heroic defense against Napoleon's invasion of England, Temeraire and Laurence-stripped of rank and standing-have been transported to the prison colony at New South Wales in distant Australia, where, it is hoped, they cannot further corrupt the British Aerial Corps with their dangerous notions of liberty for dragons. Temeraire and Laurence carry with them three dragon eggs intended to help establish a covert in the colony and destined to be handed over to such second-rate, undesirable officers as have been willing to accept so remote an assignment-including one former acquaintance, Captain Rankin, whose cruelty once cost a dragon its life. Nor is this the greatest difficulty that confronts the exiled dragon and rider: Instead of leaving behind all the political entanglements and corruptions of the war, Laurence and Temeraire have instead sailed into a hornet's nest of fresh complications. For the colony at New South Wales has been thrown into turmoil after the overthrow of the military governor, one William Bligh-better known as Captain Bligh, late of HMS Bounty. Bligh wastes no time in attempting to enlist Temeraire and Laurence to restore him to office, while the upstart masters of the colony are equally determined that the new arrivals should not upset a balance of power precariously tipped in their favor. Eager to escape this political quagmire, Laurence and Temeraire take on a mission to find a way through the forbidding Blue Mountains and into the interior of Australia. But when one of the dragon eggs is stolen from Temeraire, the surveying expedition becomes a desperate race to recover it in time-a race that leads to a shocking discovery and a dangerous new obstacle in the global war between Britain and Napoleon. Tongues of Serpents is the sixth entry in Naomi Novik's Temeraire series. Books one through five are available from Random House Audio.

Naomi Novik is the acclaimed author of "His Majesty's Dragon," "Throne of Jade," "Black Powder War," "Empire of Ivory," and "Victory of Eagles," the first five books in the Temeraire series.

Simon Vance has recorded over four hundred audiobooks and has earned over twenty "AudioFile" Earphones Awards, including for his narration of "Scaramouche" by Rafael Sabatini. He is also the recipient of five coveted Audie Awards, including one for "The King's Speech" by Mark Logue and Peter Conradi, and he was named an "AudioFile" Best Voice of 2009.

"The characters are as riveting as ever, the setting is new but convincing, and the plot, with its first-class balancing of Laurence's and Temeraire's internal and external struggles, shows Novik's continued excellence as a novelist." ---Booklist