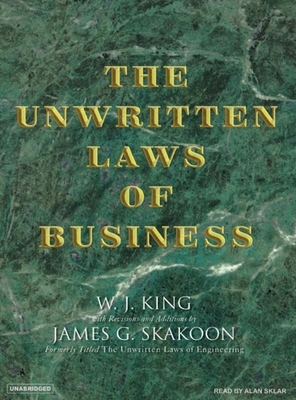 The bestselling business classic published 62 years ago that Raytheon CEO William Swanson made famous in his Unwritten Rules of Mangement. In the summer of 2005, Business 2.0 published a cover story on Raytheon CEO William Swanson's self-published pamphlet, Swanson's Unwritten Rules of Management. Lauded by such chief executives as Steve Jobs and Warren Buffett, the booklet became a quiet phenomenon; over 300,000 people over the next year wrote in requesting copies. This spring, the real secret behind Swanson's Unwritten Rules of Management was discovered-the better part of the 33 rules in Swanson's book came from a business classic called The Unwritten Laws of Engineering, published in 1944 by The American Society of Mechanical Engineers. Although over 150,000 copies have been sold over the years, by and large it has never been available through retail stores. Now, updated and revised in 2001 by James G. Skakoon and re-titled The Unwritten Rules of Business, these universal and enduring rules are available to business readers everywhere. Filled with sage advice and written in a spare, engaging style, these rules offer gems of knowledge and insight on working with others, reporting to a boss, organizing a project, running a meeting, advancing your career, and more. Success in one's career, and in one's life, depends fundamentally on communication, interpersonal skills, integrity, leadership, decorum, and personal and professional responsibility. By following the guidelines outlined in the book, new graduates and seasoned managers alike will learn how to master and apply these skills. Every once in awhile, one comes across a book with a message so timeless, so universal, that it transcends generations. We are delighted to make The Unwritten Laws of Business available to a new generation.

W. J. King was a General Electric engineer who retired as a UCLA engineering professor in 1969. James G. Skakoon is General Manager of VERTEX Technology, an engineering consulting firm.

Alan Sklar is the winner of several "AudioFile" Earphones Awards and a multiple finalist for the APA's prestigious Audie Award. Named a Best Voice of 2009 by "AudioFile" magazine, his work has twice earned him a Booklist Editors' Choice Award, a "Publishers Weekly" Listen-Up Award, and Audiobook of the Year by "ForeWord" magazine.