Havana Nocturne: How the Mob Owned Cuba...and Then Lost It to the Revolution (MP3 CD) 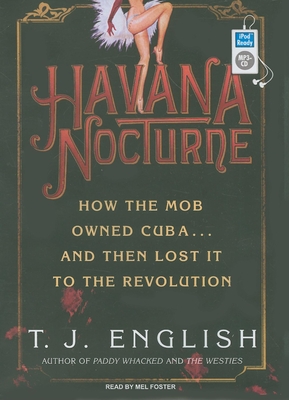 In Havana Nocturne, T. J. English offers a riveting, multifaceted true tale of organized crime, political corruption, roaring nightlife, revolution, and international conflict that interweaves the dual stories of the mob in Havana and the event that would overshadow it: the Cuban Revolution. Bringing together long-buried historical information and English's own research in Havana-including interviews with the era's key survivors-Havana Nocturne takes readers back to Cuba in the years when it was a veritable devil's playground for mob leaders Meyer Lansky and Charles "Lucky" Luciano. Thanks to strong ties with the island's brutal dictator, President Batista, the mob soon owned the biggest luxury hotels and casinos and launched an unprecedented tourist boom. But their dreams collided with those of Fidel Castro, Che Guevara, and others who would lead the country's disenfranchised to overthrow their corrupt government and its foreign partners-an epic cultural battle that English captures in all its sexy, decadent, ugly glory.

T. J. English is a journalist, a screenwriter, and the author of "Paddy Whacked: The Untold Story of the Irish American Gangster."

Mel Foster has narrated over 150 audiobooks and has won several awards. Twice an Audie finalist for "1864: Lincoln at the Gates of History" by Charles Bracelen Flood and "Finding God in Unexpected Places" by Philip Yancey, he won for the latter title.