A Flight of Angels (Paperback) 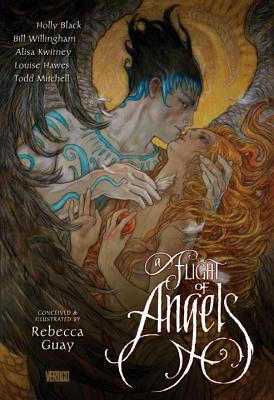 By Various, Rebecca Guay (Illustrator)
$17.99
Not available to order.

The diverse mythology of angels is explored in this lushly painted graphic novel from high-profile fantasy authors including Holly Black (The Spiderwick Chronicles) and Bill Willingham (FABLES).

Deep in the woods outside of a magical kingdom, a strange group of faeries and forest creatures discover a nearly dead angel, bleeding and unconscious with a sword by his side. They call a tribunal to decide his fate, each telling stories that delve into different interpretations of these winged, celestial beings: tales of dangerous angels, all-powerful angels, guardian angels and death angels, that range from the mystical to the mysterious to the macabre.

This original graphic novel spotlights the painted work of award-winning artist Rebecca Guay, whose other workds include the Vertigo titles VEILS and DESTINY: A CHRONICLE OF DEATHS FORETOLD, as well as World of Warcraft, Magic: The Gathering and Dungeons and Dragons.

Rebecca Guay is one of comics' most venerated fantasy illustrators working today. Best known for her work on the popular card game MAGIC: THE GATHERING, Rebecca has also seen extensive publishing in the fantasy and gaming industry with DUNGEONS AND DRAGONS and WORLD OF WARCRAFT. Most recently she teamed up with Eisner Award-winning and NEW YORK TIMES bestselling author Bill Willingham on Vertigo's original graphic novel A FLIGHT OF ANGELS. Rebecca resides in Massachusetts with her husband, artist Matthew Mitchell and daughter Vivian.

"A captivating that tale weaves five distinct voices into one ethereal vision! This compilation has phenomenal storylines and exceptional art. A Flight of Angels is truly an enchanting and compelling book."—ROMANTIC TIMES

"If SUPERMAN is the strength of comics, A FLIGHT OF ANGELS is the soul."—AIN'T IT COOL NEWS