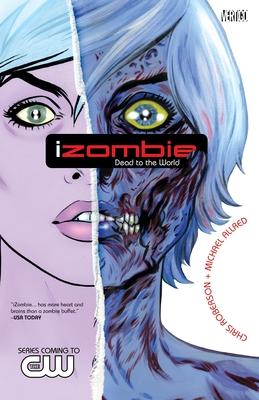 Gwendolyn “Gwen” Dylan is a 20-something gravedigger in an eco-friendly cemetery. Once a month she must eat a human brain to keep from losing her memories, but in the process she becomes consumed with the thoughts and personality of the dead person – until she eats her next brain. She sets out to fulfi ll the dead person’s last request, solve a crime or right a wrong.

Our zombie girl detective is joined by a radical supporting cast: her best friend Eleanor, who happens to be a swinging ’60s ghost, a posse of paintball blasting vampires, a smitten were-dog and a hot but demented mummy.

Chris Roberson's writings include the novels Here, There & Everywhere, The Voyage of Night Shining White, Paragaea: A Planetary Romance, X-Men: The Return, Set the Seas on Fire, The Dragon's Nine Sons, End of the Century, Iron Jaw and Hummingbird, Three Unbroken, and Warhammer 40K: Dawn of War II, and the comic book series Cinderella: From Fabletown With Love. His short stories have appeared in such magazines as Asimov's, Interzone, Postscripts, and Subterranean, and in anthologies such as Live Without a Net, FutureShocks, and Forbidden Planets. Along with his business partner and spouse Allison Baker, he is the publisher of MonkeyBrain Books, an independent publishing house specializing in genre fiction and nonfiction genre studies, and he is the editor of anthology Adventure Vol. 1. He has been a finalist for the World Fantasy Award four times--once each for writing and editing, and twice for publishing--twice a finalist for the John W. Campbell Award for Best New Writer, and four times for the Sidewise Award for Best Alternate History (winning the Short Form in 2004 with his story "O One" and the Long Form in 2008 with his novel The Dragon's Nine Sons). Chris and Allison live in Austin, Texas with their daughter Georgia.