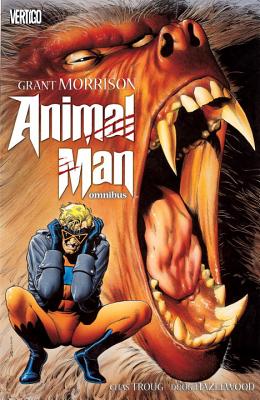 A New York Times #1 Best Seller From Grant Morrison, Eisner Award winning writer of ALL-STAR SUPERMAN and bestselling author of Supergods: What Masked Vigilantes, Miraculous Mutants, and a Sun God from Smallville Can Teach Us About Being Human, this new hardcover collects Morrison's entire groundbreaking run on ANIMAL MAN altogether for the first time . Buddy Baker is more than just a second-rate super hero--He's also a devoted family man and animal rights activist. Now, as he tries to jump-start his crimefighting career, he experiences visions of aliens, people transforming into strange pencil-like drawings, and hints of a terrible crisis lurking around the edges of reality. And as his odyssey of self-discovery gives way to spiritual enlightenment as well as the depths of despair, Buddy meets his maker: a writer named Grant Morrison. Collects ANIMAL MAN #1-26 and SECRET ORIGINS #39.

Grant Morrison has been working with DC Comics for more than twenty years, beginning his American career with acclaimed runs on ANIMAL MAN, DOOM PATROL and the ARKHAM ASYLUM graphic novel. Since then, he has written such best-selling series as JLA, BATMAN and New X-Men, as well as his creator-owned titles such as THE INVISIBLES, SEAGUY, THE FILTH and WE3. He has been hard at work expanding the DC Universe in titles ranging from the Eisner-Award winning titles SEVEN SOLDIERS and ALL STAR SUPERMAN, to the weekly comic 52 to, most recently, the ground-breaking crossover FINAL CRISIS. In his secret identity, Morrison is a "counterculture" spokesperson, a musician, an award-winning playwright and a chaos magician. He lives and works between Los Angeles and his homes in Scotland.