The Girl with the Dragon Tattoo (Paperback) 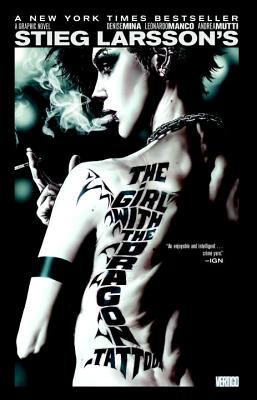 DC Comics/Vertigo will publish the official graphic novel adaptation of Stieg Larsson's "Millennium Trilogy," starting in Fall 2012 with THE GIRL WITH THE DRAGON TATTOO, the international publishing phenomenon.

Harriet Vanger, a scion of one of Sweden's wealthiest families disappeared over forty years ago. All these years later, her aged uncle continues to seek the truth. He hires Mikael Blomkvist, a crusading journalist recently trapped by a libel conviction, to investigate. He is aided by the pierced and tattooed punk prodigy Lisbeth Salander. Together they tap into a vein of unfathomable iniquity and astonishing corruption.

Denise Mina is the award-winning author of eight acclaimed crime novels and is one of the leading figures in Scotland's "Tartan Noir" genre of crime fiction. Denise made her comics debut with a 13-issue run of HELLBLAZER in 2006-2007. Her first graphic novel was the Vertigo Crime title A SICKNESS IN THE FAMILY.

Stieg Larsson, who lived in Sweden, was the editor in chief of the magazine EXPO and a leading expert on antidemocratic right-wing extremist and Nazi organizations. He died in 2004, shortly after delivering the manuscripts for THE GIRL WITH THE DRAGON TATTOO, THE GIRL WHO PLAYED WITH FIRE, and THE GIRL WHO KICKED THE HORNET'S NEST.

Praise for THE GIRL WITH THE DRAGON TATTOO:

"A whip-smart heroine and a hunky guy who needs her help? This sexy, addictive thriller is everything you never knew you could get from a crime novel."—GLAMOUR

"Unique and fascinating.... It's like a blast of cold, fresh air to read The Girl With the Dragon Tattoo."—CHICAGO TRIBUNE

"Combine the chilly Swedish backdrop and moody psychodrama of a Bergman movie with the grisly pyrotechnics of a serial-killer thriller, then add an angry punk heroine and a down-on-his-luck investigative journalist, and you have the ingredients of Stieg Larsson's first novel."—THE NEW YORK TIMES

“I am beginning to believe that Denise Mina is the finest contemporary exponent of British crime fiction.”—Marcel Berlins, THE TIMES (LONDON)