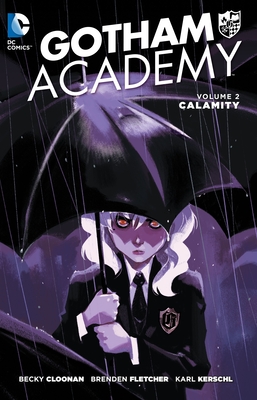 At the beginning of the term, Olive Silverlock returned to Gotham Academy a shadow of her former self. But thanks to her new friendships and their Detective Club sleuthing, Olive was finally starting to feel whole again.

Then, abruptly, Olive’s mother died—or, she seemed to. In the weeks after the funeral, Olive begins seeing her mother around the school. An Arkham Asylum patient with a deadly dark side, Sybil Silverlock was a powerful and complicated woman. Could her spirit be reaching out from beyond the grave? And if so, is it motherly Sybil who haunts Olive—or her deadly alter ego Calamity?

Plus, the kids hunt a werewolf on campus and Maps teams up with the Academy’s newest transfer, Damian Wayne!

Becky Cloonan is an American comic book artist and creator known for her manga-influenced artwork. Her first major comics work came when she teamed with writer Brian Wood to create Channel Zero: Jennie One.  However, she is best-known for her second collaboration with Wood, DEMO, a 12-issue limited series that was named "Indie of the Year" by Wizard Magazine in 2004 and nominated for two Eisner Awards including Best Limited Series. In 2009 Cloonan and Wood expanded DEMO and re-published it through DC Comics' Vertigo imprint. Cloonan's first solo graphic novel, East Coast Rising Volume 1, earned her a third Eisner Award nomination for Best New Series. Her other work for DC Comics includes AMERICAN VIRGIN, co-created with writer Steven T. Seagle, and NORTHLANDERS for Vertigo as well as issues of BATMAN and SWAMP THING.

"Gorgeous, grinning and full of promise, "Gotham Academy" is easily my favorite first issue of the fall."--CBR

"Whether you're a longtime Bat fan or one new to the fold, Gotham Academy is a winner."--IGN

"Cloonan and Fletcher tap straight into the mainline of freshness with this mixture of old school mystery adventure and morning cartoon."--NEWSARAMA

"The creative team has knocked this one out of the park."--COMICVINE