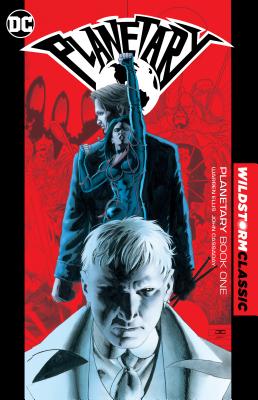 By Warren Ellis, John Cassaday (Illustrator)
$29.99
On Our Shelves Now

From critically acclaimed author Warren Ellis (THE AUTHORITY, TRANSMETROPOLITAN) and artist John Cassaday comes the ultimate collection of PLANETARY in PLANETARY BOOK ONE.

This book collects the adventures of Elijah Snow, a powerful hundred-year-old man, Jakita Wagner, an extremely powerful but bored woman, and the Drummer, a man with the ability to communicate with machines. Infatuated with tracking down evidence of superhuman activity, these mystery archaeologists of the late twentieth century uncover unknown paranormal secrets and histories, such as a World War II supercomputer that can access other universes, a ghostly spirit of vengeance and a lost island of dying monsters.

This new cut of the classic series includes extras from the Absolute Edition, including sketches and variant covers. Collecting PLANETARY #1-14, PLANETARY SNEAK PEAK, PLANETARY/AUTHORITY TO RULE THE WORLD.

Warren Ellis is the award-winning writer of graphic novels like TRANSMETROPOLITAN, Fell, Ministry of Space and PLANETARY, and the author of the New York Times-bestselling Gun Machine (being adapted for TV by Microsoft Xbox) and the "underground classic" novel Crooked Little Vein. The movie Red is based on his graphic novel of the same name, its sequel having been released in summer 2013. His Gravel books are in development for film at Legendary Pictures. Iron Man 3 is based on his Marvel Comics graphic novel Iron Man: Extremis. He's also written extensively for Vice, Wired UK and Reuters on technological and cultural matters. Warren Ellis is currently working on a non-fiction book about the future of the city for Farrar Straus Giroux.