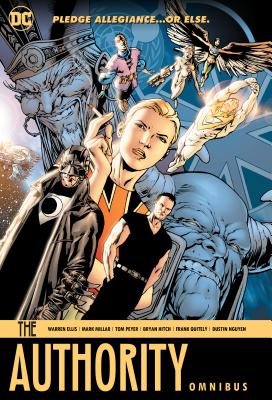 By Warren Ellis, Bryan Hitch (Illustrator)
$99.99
On Our Shelves Now

Warren Ellis' New York Times bestseller The Authority is considered one of the most groundbreaking titles in modern comics history. Now collected in it's entirety for the first time in omnibus format!

The Authority are heroes in only the strictest sense of the word. Ruthless and unforgiving, this group of insanely powerful superhumans face down countless menaces to Earth, protecting mankind with their cold version of justice. The team includes:

Midnighter, an unstoppable fighter capable of taking down the toughest opponents.

The Doctor, a man capable of warping reality itself.

The Engineer, a brilliant scientist with complete command of nanotechnology.

Jack Hawksmoor, God of the Cities, who draws his powers from urban surroundings.

Swift, the winged superhuman known as the fastest flyer on the planet.

This tough team must face an invasion from an alternate Earth, an international terrorist who is laying waste to major cities and a hostile alien intelligence who calls himself God--and all fall under their rule. Whether it's terrorists or superhuman villains capable of destruction on an unthinkable scale, the team is ready to take on the foes the rest of the world isn't strong enough to fight.

This is The Authority. Pay allegiance. Or get your head kicked in.

Warren Ellis is a comics and graphic novel writer best known for the graphic novel series Transmetropolitan, Planetary and The Authority. With over 35 graphic novels in print, Ellis has received numerous accolades, including winning the International Horror Guild award for graphic narrative and being named one of Entertainment Weekly's 100 Most Creative People.