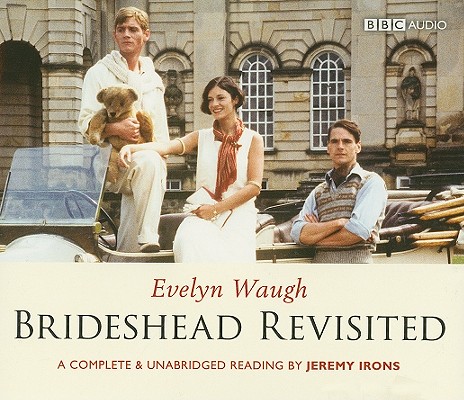 By Evelyn Waugh, Jeremy Irons (Narrator)
$39.95
Backordered. Place an order and we will let you know when to expect your book.

Charles Ryder’s friendship with the charming Sebastian Flyte and his family begins when they are both at Oxford in 1923. Carefree days of drinking champagne and driving in the country soon end, however, as Sebastian’s health deteriorates. Questions about morality and religion are raised as the radiant tone gives way to a bleak atmosphere of shattered illusion. This an unabridged reading of Evelyn Waugh’s most romantic and controversial book, narrated by revered British actor Jeremy Irons.

Evelyn Waugh was born in 1903 and was educated at Hertford College, Oxford, England. His novels include "Decline and Fall, Vile Bodies, Black Mischief, A Handful of Dust, Scoop, Brideshead Revisited, " and "Men at Arms." He died in 1966.

Jeremy Irons is a Tony-, Golden Globe-, and Oscar-winning British actor who has starred in such films as "Dead Ringers, Reversal of Fortune, Being Julia, " and "Stealing Beauty." He starred in the popular miniseries version of "Brideshead Revisited" in 1981.