Next to Love (Large Print / Hardcover) 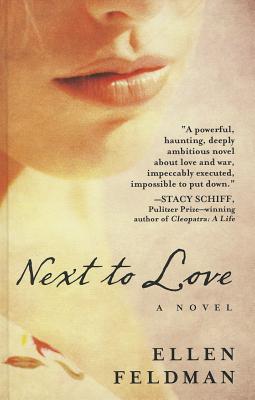 By Ellen Feldman
Unavailable. Orders will be auto-cancelled.

“The 'Greatest Generation' and the battles to defeat Germany in Europe during WWII have received generous and much-deserved attention. Ellen Feldman turns our attention to the home front in a moving and insightful story of three young women in a small New England town, two of whom lose husbands on the Normandy beaches, and one whose returning husband is haunted by what we now know as PTSD. How they attempt to rebuild their lives is a story beautifully told. Feldman's narrative also encompasses the racism and the anti-Semetism of those years as well as the nascent women's movement without ever seeming didactic. A brilliant book!”
— Marian Nielsen, Orinda Books, Orinda, CA

"War . . . next to love, has most captured the world's imagination."--Eric Partridge, British lexicographer, 1914
A story of love, war, loss, and the scars they leave, "Next to Love" follows the lives of three young women and their men during the years of World War II and its aftermath, beginning with the men going off to war and ending a generation later, when their children are on the cusp of their own adulthood.
Set in a small town in Massachusetts, the novel follows three childhood friends, Babe, Millie, and Grace, whose lives are unmoored when their men are called to duty. And yet the changes that are thrust upon them move them in directions they never dreamed possible--while their husbands and boyfriends are enduring their own transformations. In the decades that follow, the three friends lose their innocence, struggle to raise their children, and find meaning and love in unexpected places. And as they change, so does America--from a country in which people know their place in the social hierarchy to a world in which feminism, the Civil Rights movement, and technological innovations present new possibilities--and uncertainties. And yet Babe, Millie, and Grace remain bonded by their past, even as their children grow up and away and a new society rises from the ashes of the war.
Beautifully crafted and unforgettable, "Next to Love" depicts the enduring power of love and friendship, and illuminates a transformational moment in American history.